What is hail?
Hail is a form of precipitation consisting of solid ice that forms inside thunderstorm updrafts. Hail can damage aircraft, homes and cars, and can be deadly to livestock and people.
What we do: Read more about NSSL's hail research here.
How does hail form?
Hailstones are formed when raindrops are carried upward by thunderstorm updrafts into extremely cold areas of the atmosphere and freeze. Hailstones then grow by colliding with liquid water drops that freeze onto the hailstone’s surface. If the water freezes instantaneously when colliding with the hailstone, cloudy ice will form as air bubbles will be trapped in the newly formed ice. However, if the water freezes slowly, the air bubbles can escape and the new ice will be clear. The hail falls when the thunderstorm's updraft can no longer support the weight of the hailstone, which can occur if the stone becomes large enough or the updraft weakens.

Hailstones can have layers of clear and cloudy ice if the hailstone encounters different temperature and liquid water content conditions in the thunderstorm. The conditions experienced by the hailstone can change as it passes horizontally across or near an updraft. The layers, however, do not occur simply due to the hailstone going through up and down cycles inside a thunderstorm. The winds inside a thunderstorm aren’t simply up and down; horizontal winds exist from either a rotating updraft, like in supercell thunderstorms, or from the surrounding environment’s horizontal winds. Hailstones also do not grow from being lofted to the top of the thunderstorm. At very high altitudes, the air is cold enough (below -40°F) that all liquid water will have frozen into ice, and hailstones need liquid water to grow to an appreciable size.
How does hail fall to the ground?
Hail falls when it becomes heavy enough to overcome the strength of the thunderstorm updraft and is pulled toward the earth by gravity. Smaller hailstones can be blown away from the updraft by horizontal winds, so larger hail typically falls closer to the updraft than smaller hail. If the winds near the surface are strong enough, hail can fall at an angle or even nearly sideways! Wind-driven hail can tear up siding on houses, break windows and blow into houses, break side windows on cars, and cause severe injury and/or death to people and animals.
How fast does hail fall?
This is a very complicated answer. The fall speed of hail primarily depends on the size of the hailstone, the friction between the hailstone and surrounding air, the local wind conditions (both horizontal and vertical), and the degree of melting of the hailstone. Early research assumed that hailstones fell like solid ice spheres and showed very high fall speeds, even for very small hailstones. However, recent research outside of NSSL using 3-D printed casts of real hailstones suspended in a vertical wind tunnel has repeatedly shown that natural hailstones fall more slowly than solid ice spheres. For small hailstones (<1-inch in diameter), the expected fall speed is between 9 and 25 mph. For hailstones that one would typically see in a severe thunderstorm (1-inch to 1.75-inch in diameter), the expected fall speed is between 25 and 40 mph. In the strongest supercells that produce some of the largest hail one might expect to see (2-inches to 4-inches in diameter), the expected fall speed is between 44 and 72 mph. However, there is much uncertainty in these estimates due to variability in the hailstone’s shape, degree of melting, fall orientation, and the environmental conditions. However, it is possible for very large hailstones (diameters exceeding 4-inches) to fall at over 100 mph.
What areas have the most hail?
Although Florida has the most thunderstorms, Nebraska, Colorado, and Wyoming usually have the most hailstorms. The area where these three states meet – “hail alley” – averages seven to nine hail days per year. Other parts of the world that have damaging hailstorms include China, Russia, India and northern Italy.

When viewed from the air, it is evident that hail falls in paths known as hail swaths. These occur as storms move while the hail is falling out They can range in size from a few acres to an area 10 miles wide and 100 miles long. Some storms, instead of producing large hail, instead produce copious amounts of small hail. Storms like these have produced hail drifts that, when captured in clogged drainage channels, formed piles of hail several feet deep. Hail that completely covers roadways is especially hazardous because if deep enough, a vehicle’s tires may not touch the roadway at all, with the vehicle instead driving on the hail, which acts exactly like an icy roadway in the winter.
How large can hail get?
The largest hailstone recovered in the United States fell in Vivian, South Dakota, on June 23, 2010, with a diameter of 8 inches and a circumference of 18.62 inches. It weighed 1 lb 15 oz.
Estimating Hail Size
Hail size is often estimated by comparing it to a known object. Most hailstorms are made up of a mix of different sizes, and only the very largest hail stones pose serious risk to people caught in the open. When reporting hail, estimates comparing the hail to a known object with definite size are good, but measurements using a ruler, calipers, or a tape measure are best.

What we do: NSSL's mPING project collects reports from the public about hail and other weather phenomena in their vicinity via a free mobile app. This data is used to refine radar algorithms that detect hail, and to enhance climatological information about hail in the U.S. Similarly, the Severe Hail Verification Experiment (SHAVE) collected data on hail by making phone calls to the public along the path of selected storms. NSSL is involved in using high-speed photography to try to capture large hailstones in natural free-fall to confirm hailstone fall velocity estimates and tumbling characteristics of those hailstones. 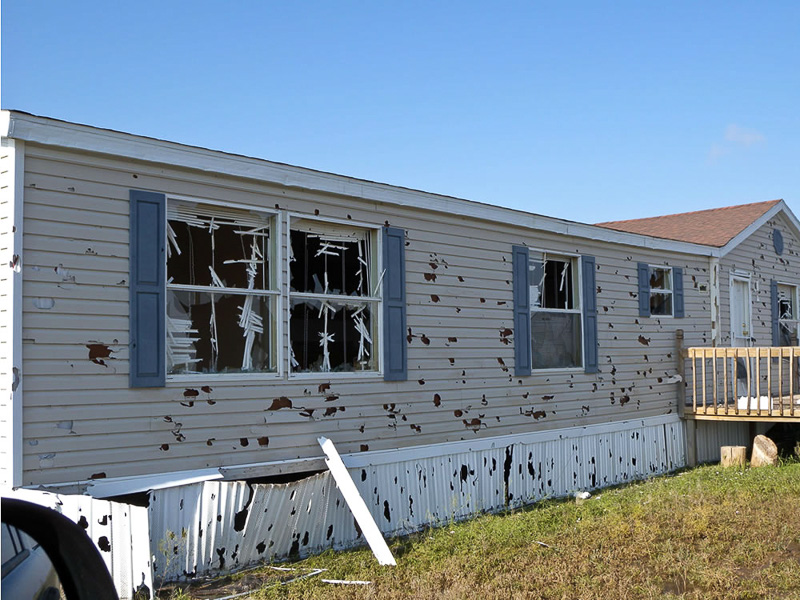 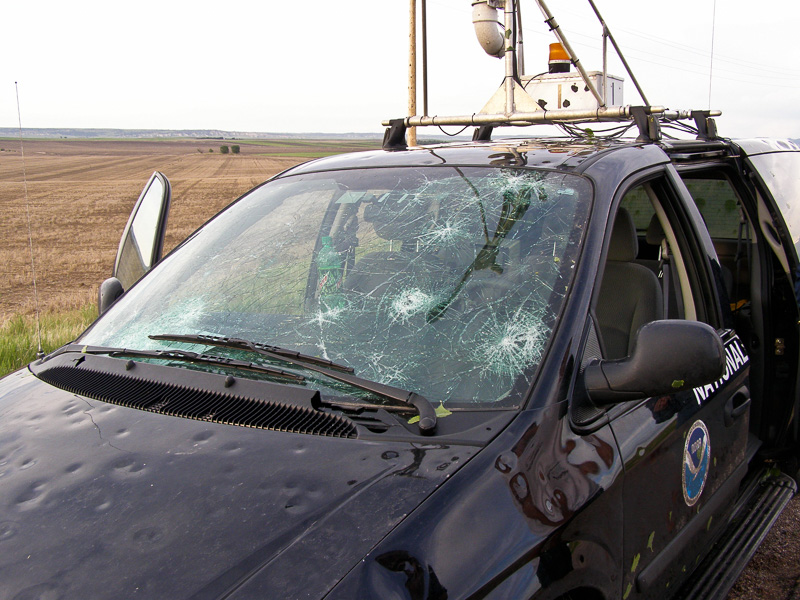 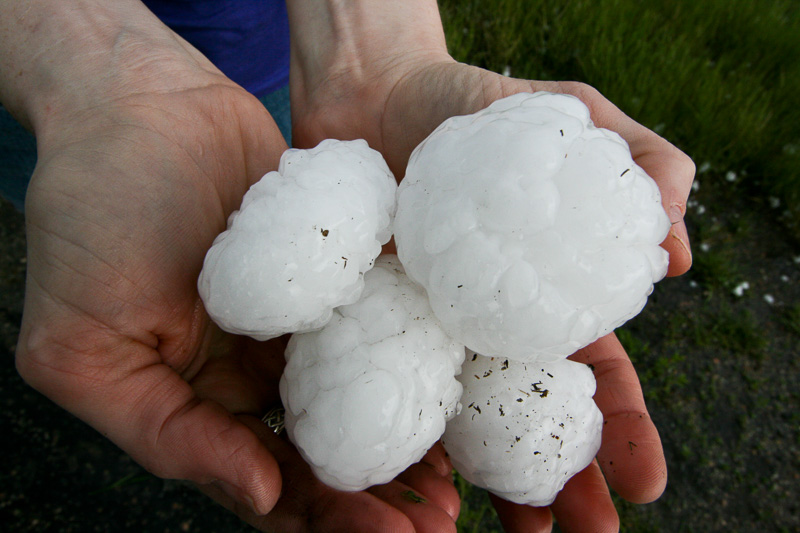 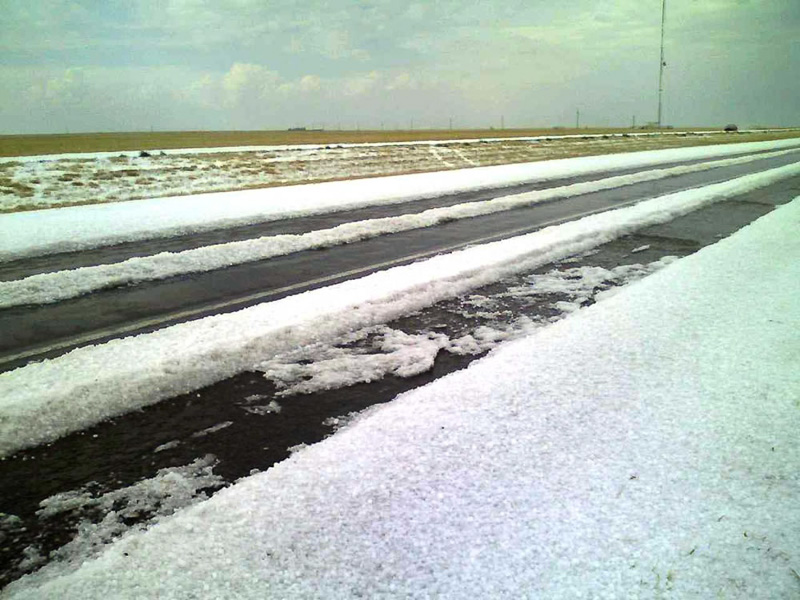 Piles of hail in hail swaths have been so deep, a snow plow was required to remove them, and occasionally, hail drifts have been reported. [+]