Tornadoes that come from a supercell thunderstorm are the most common, and often the most dangerous. A rotating updraft is a key to the development of a supercell, and eventually a tornado. There are many ideas about how this rotation begins. One way a column of air can begin to rotate is from wind shear – when winds at two different levels above the ground blow at different speeds or in different directions. 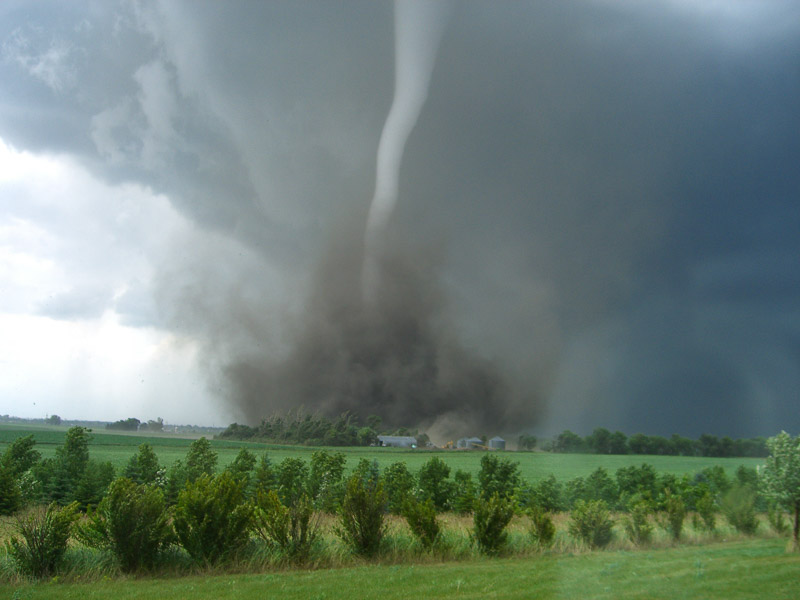 Tornadoes that come from a supercell thunderstorm are the most common, and often the most dangerous. [+]

An example of wind shear that can eventually create a tornado is when winds at ground level, often slowed down by friction with the earth's surface, come from the southwest at 5 mph. But higher up, at 5000 feet above the same location, the winds are blowing from the southeast at 25 mph! An invisible “tube” of air begins to rotate horizontally. Rising air within the thunderstorm tilts the rotating air from horizontal to vertical – now the area of rotation extends through much of the storm.

Once the updraft is rotating and being fed by warm, moist air flowing in at ground level, a tornado can form. There are many ideas about this too.

Scientists still have many questions. As few as 20 percent of all supercell thunderstorms actually produce tornadoes. Why does one supercell thunderstorm produce a tornado and another nearby storm does not? What are some of the causes of winds moving at different speeds or directions that create the rotation? What are other circulation sources for tornadoes? What is the role of downdrafts (a sinking current of air) and the distribution of temperature and moisture (both horizontally and vertically) in tornadogenesis?

And, since not all tornadoes come from supercells, what about tornadogenesis in non-supercell thunderstorms?

QLCS tornadoes are associated with lines of strong thunderstorms, and frequently occur during late night and early morning hours. [+]

Another type of non-supercell tornado is a landspout. A landspout is a tornado with a narrow, rope-like condensation funnel that forms while the thunderstorm cloud is still growing and there is no rotating updraft - the spinning motion originates near the ground.

Waterspouts are similar to landspouts, except they occur over water. Damage from these types of tornadoes tends to be EF2 or less.