Accurately forecasting winter weather is a complicated process. It starts with a wide network of observing systems such as satellites, Doppler radars and automated surface observing systems. Computer forecast models take this information and estimate what will happen next. Forecasters then use their experience to write and issue forecasts.

What we do: A team of NSSL scientists in collaboration with the National Weather Service is working on ways to better forecast potentially dangerous winter weather to cut down on the impact of winter weather hazards on travelers. The researchers have developed a new tool that helps forecasters anticipate when roadway temperatures are below freezing, which in turn allows them to predict how likely they’ll accumulate snow and ice, including hard-to-see black ice resulting from freezing drizzle. Read more on research.noaa.gov →

Knowing the climatology for a given area is very important to be able to forecast winter weather. Winter storms come in different sizes and are created by different combinations of atmospheric conditions and local geography.

The classic storm is called a Nor'easter. A low-pressure area off the Carolina coast strengthens and moves north. Wind-driven waves batter the coast from Virginia to Maine, causing flooding and severe beach erosion. The storm taps the Atlantic Ocean's moisture-supply and dumps heavy snow over a densely populated region. The snow and wind may combine into blizzard conditions and form deep drifts paralyzing the region. Ice storms are also a problem. Mountains, such as the Appalachians, act as a barrier to cold air trapping it in the valleys and adjacent low elevations. Warm air and moisture moves over the cold, trapped air. Rain falls from the warm layer onto a cold surface below becoming ice.

This region is generally not used to snow, ice, and freezing temperatures. Once in awhile, cold air penetrates south across Texas and Florida, into the Gulf of Mexico. Temperatures fall below freezing killing tender vegetation, such as flowering plants and the citrus fruit crop. Wet snow and ice rapidly accumulate on trees with leaves, causing the branches to snap under the load. Motorists are generally unaccustomed to driving on slick roads and traffic accidents increase. Some buildings are poorly insulated or lack heat altogether. Local towns may not have available snow removal equipment or treatments, such as sand or salt for icy roads.

Storms tend to develop over southeast Colorado in the lee of the Rockies. These storms move east or northeast and use both the southward plunge of cold air from Canada and the northward flow of moisture from the Gulf of Mexico to produce heavy snow and sometimes blizzard conditions. Other storms affecting the Midwest and plains intensify in the lee of the Canadian Rockies and move southeast. Arctic air is drawn from the north and moves south across the Plains and Great Lakes. Wind and cold sometimes combine to cause wind chill temperatures as low as 70 degrees below zero. The wind crosses the lakes, tapping its moisture and forming snow squalls and narrow heavy snow bands. This is called “lake-effect snow.”

From the Rockies to the West Coast

Strong storms crossing the North Pacific sometimes slam into the coast from California to Washington. The vast Pacific provides an unlimited source of moisture for the storm. If cold enough, snow falls over Washington, Oregon and California. As the moisture rises into the mountains, heavy snow closes the mountain passes and can cause avalanches. The cold air from the north has to filter through mountain canyons into the basins and valleys to the south. If the cold air is deep enough, it can spill over the mountain ridge. As the air funnels through canyons and over ridges, wind speeds can reach 100 mph, damaging roofs and taking down power and telephone lines. Combining these winds with snow results in a blizzard.

Wind-driven waves from intense storms crossing the Bering Sea produce coastal flooding and can drive large chunks of sea ice inland destroying buildings near the shore. High winds, especially across Alaska's Arctic coast, can combine with loose snow to produce a blinding blizzard and wind chill temperatures to 90 degrees below zero! Extreme cold and ice fog may last a week at a time. Heavy snow can impact the interior and is common along the southern coast. With only brief glimpses of the winter sun across the southern horizon, the snow accumulates through the winter months. In the mountains, it builds glaciers, but the heavy snow accumulations can also cause avalanches or collapse roofs of buildings. A quick thaw means certain flooding. Ice jams on rivers can also cause substantial flooding.

What we do: NSSL researchers developed freezing rain climatology for local and national forecasting centers, including the Storm Prediction Center, that was unprecedented in magnitude. Their aim was to help forecasters better understand regional and temporal susceptibility to freezing rain. They found that over New York and Pennsylvania, cold-air outbreaks interact with coastal cyclones, making the area more susceptible to freezing rain. Another area experiencing higher reports of freezing rain is in the Pacific Northwest, where storm systems generate precipitation and interact with cold air trapped in the Basin. A third area is located in the lee of the Appalachian Mountains. In this region, cold air damming is a common occurrence during the winter months, contributing to significant ice storms. Precipitation systems, often originating in the Gulf of Mexico or forming along the coastal front, interact with the subfreezing air in the damming region to produce freezing rain.

FASTEX – Shannon, Ireland, was the base of field operations for the Fronts and Atlantic Storm Tracks Experiment, a multinational program that intensely documented and studied the life cycles of cyclones originating over the data-sparse North Atlantic during January and February 1997. During FASTEX, observations were made using up to seven research aircraft and four research ships. NSSL scientists played a lead role in the design and execution of FASTEX as principal investigators, aircraft chief scientists and members of the P-3 aircraft crew. FASTEX provided the first data sets to document the evolution of rapidly developing cyclones over the ocean. FASTEX was also the first project to target observations where numerical models indicated there would be a benefit to forecasts of cyclone development. Using data collected during FASTEX, scientists are making numerical simulations of cyclone structure and dynamics. Researchers expect results to apply to storm tracks over both the Pacific and Atlantic oceans. 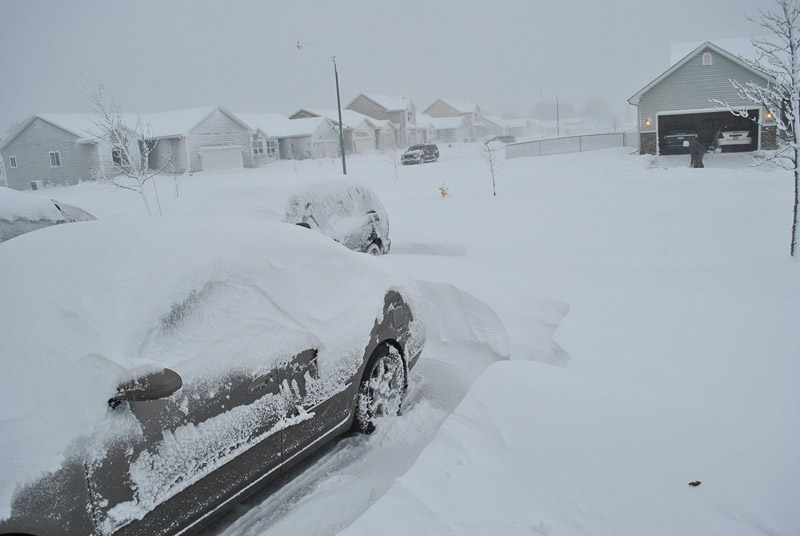 Nor'easters and lake effect snows can result in very large accumulations of snow. [+] 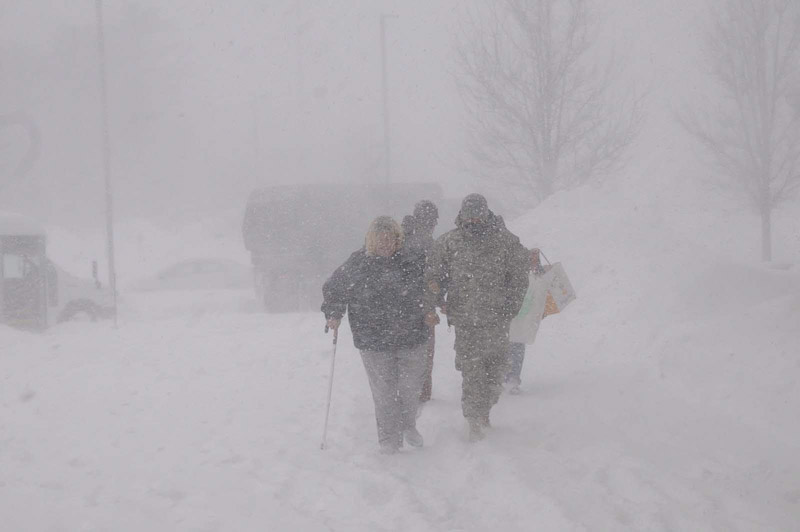 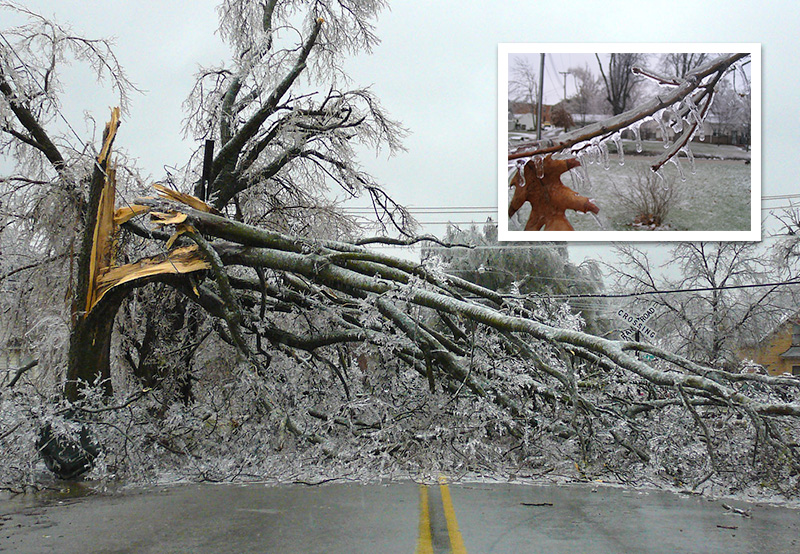 Ice from freezing rain can build up on tree branches and power lines, causing them to break under the weight. [+] 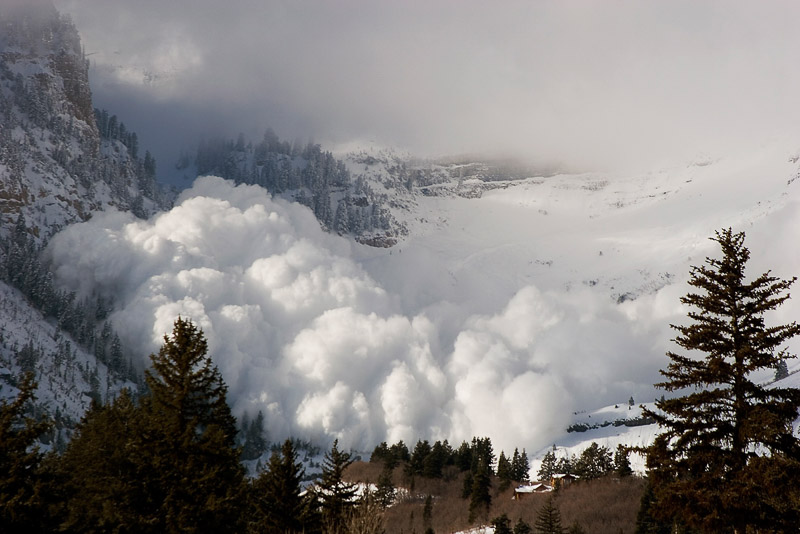 Heavy snow accumulations in the mountains can result in avalanches. [+]