Most lightning starts inside a thunderstorm and travels through the cloud. It can then stay within the cloud or continue to travel through the open air and eventually to ground. There are roughly 5 to 10 times as many flashes that remain in the cloud as there are flashes which travel to the ground, but individual storms may have more or fewer flashes reaching ground. Lightning can strike where it’s not raining, or even before rain reaches the ground! 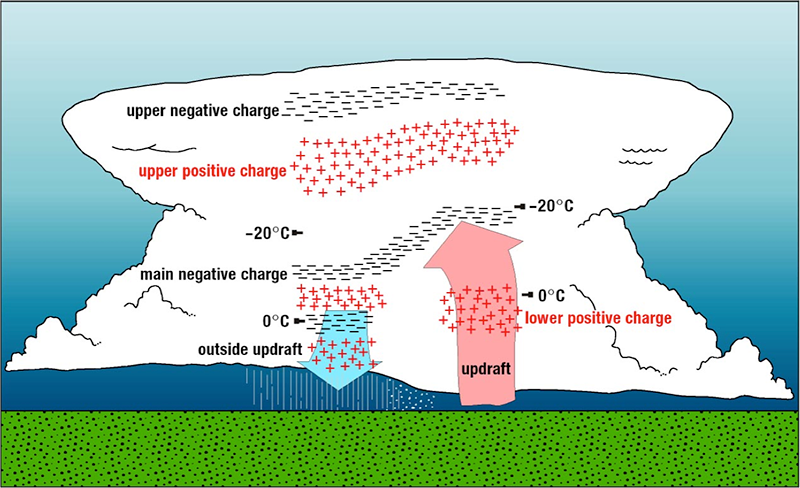 Does lightning go up or down? There are two ways that flashes can strike ground: naturally downward (those that occur because of normal electrification in the environment), and artificially initiated or triggered upward. Artificially initiated lightning is associated with things like very tall structures, rockets and towers. Triggered lightning starts at the “ground,” which in this case may mean the top of a tower, and travels upward into the cloud, while “natural” lightning starts in the cloud and travels to ground. Upward triggered lightning usually occurs in response to a natural lightning flash, but on rare occasions can be “self-triggered”—usually in winter storms with strong winds. Lightning can also be triggered by aircraft flying through strong electric fields. If the plane is below the cloud, then a CG flash could result.

In the most common type of cloud-to-ground lightning (CG), a channel of negative charge, called a stepped leader, will zigzag downward in roughly 50-yard segments in a forked pattern. This stepped leader is invisible to the human eye, and shoots to the ground in less time than it takes to blink. As it nears the ground, the negatively charged stepped leader causes streamer channels of positive charge to reach upward, normally from taller objects in the area, such as a tree, house, or telephone pole. When the oppositely-charged leader and streamer connect, a powerful electrical current begins flowing. This return stroke current of bright luminosity travels about 60,000 miles per second back towards the cloud. A negative CG flash consists of one or perhaps as many as 20 return strokes. We see lightning flicker when the process rapidly repeats itself several times along the same path. The actual diameter of the lightning channel current is one to two inches, surrounded by a region of charged particles.

The more common cloud-to-ground flash has a negative stepped leader that travels downward through the cloud, followed by an upward traveling return stroke. The net effect of this flash is to lower negative charge from the cloud to the ground so it is commonly referred to as a negative CG (or -CG). Less commonly, a downward traveling positive leader followed by an upward return stroke will lower positive charge to earth, referred to as a positive CG (or +CG). +CG flashes typically have only a single return stroke, and they are more likely than -CGs to have a sustained current flow. Some storms produce more positive than negative CGs because of the charge distribution in the storms, but+CG dominated storms are not as common. Storms which produce mostly negative CGs tend to produce CGs earlier in the storm lifecycle and produce significantly more CGs than similar storms which instead produce mostly positive CGs.

A “bolt from the blue” is a CG which starts inside a cloud, goes out the side of the storm, then travels horizontally away from the cloud before going to ground. A bolt from the blue can strike ground at a spot with “blue sky” above it. So even a storm that is 6 miles away can be dangerous.

There are many flashes which do not reach ground. Most of these remain within the cloud and are called intra-cloud (IC) lightning flashes. Cloud flashes sometimes have visible channels that extend out into the air around the storm (cloud-to-air or CA), but do not strike the ground. The term sheet lightning is used to describe an IC flash embedded within a cloud that lights up as a sheet of luminosity during the flash.

A related term, heat lightning, is any lightning (IC or CG) or lightning-induced illumination that is too far away for the thunder to be heard. It may have reddish (“heat”) color, like sunsets, because of scattering of blue light. There are a lot of misconceptions about heat lightning, but it’s no different than regular lightning. Lightning can also travel from one cloud to another, or cloud-to-cloud (CC). Spider lightning refers to long, horizontally traveling flashes often seen on the underside of stratiform clouds. Spider lightning is often linked to +CG flashes.

Large thunderstorms are capable of producing other kinds of electrical phenomena called transient luminous events (TLEs) that occur high in the atmosphere. They are rarely observed visually and not well understood. The most common TLEs include red sprites, blue jets, and elves.

Sprites can appear directly above an active thunderstorm as a large but weak discharge. They usually happen at the same time as powerful positive CG lightning strokes. They can extend up to 60 miles from the cloud top. Sprites are mostly red and usually last no more than a few seconds, and their shapes are described as resembling jellyfish, carrots, or columns. Because sprites are not very bright, they can only be seen at night. They are rarely seen with the human eye, so they are most often imaged with highly sensitive cameras.

Blue jets and gigantic jets emerge from the top of the thundercloud, but are not directly associated with cloud-to-ground lightning. They extend up in narrow cones fanning out and disappearing at heights of 25-35 miles. Gigantic jets go even higher to the ionosphere. Blue jets last a fraction of a second and have been witnessed by pilots.

Elves are rapidly expanding disk-shaped regions of glowing that can be up to 300 miles across. They last less than a thousandth of a second, and occur above areas of active cloud to ground lightning. Elves result when an energetic electromagnetic pulse extends up into the ionosphere. Elves were discovered in 1992 by a low-light video camera on the Space Shuttle, and are now known to be associated with terrestrial gamma ray flashes (TGFs). TGFs were discovered in the 2000s by satellites designed to detect cosmic gamma rays, but it was found that some signals were coming from thunderstorms on earth! TGF appear to originate where strong electric fields exist in a deep region to act as a particle accelerator that is seeded by cosmic ray particles. This can also produce beams of relativistic electrons. Normal lightning also produces x-rays that can be detected at the ground. 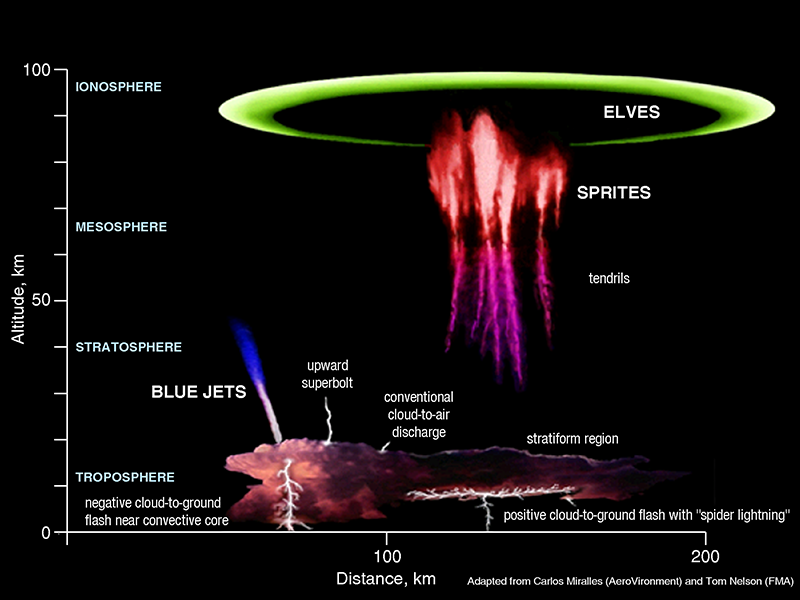 An illustration of different kinds of transient luminous events (TLEs) [+]

An illustration of different kinds of transient luminous events (TLEs) 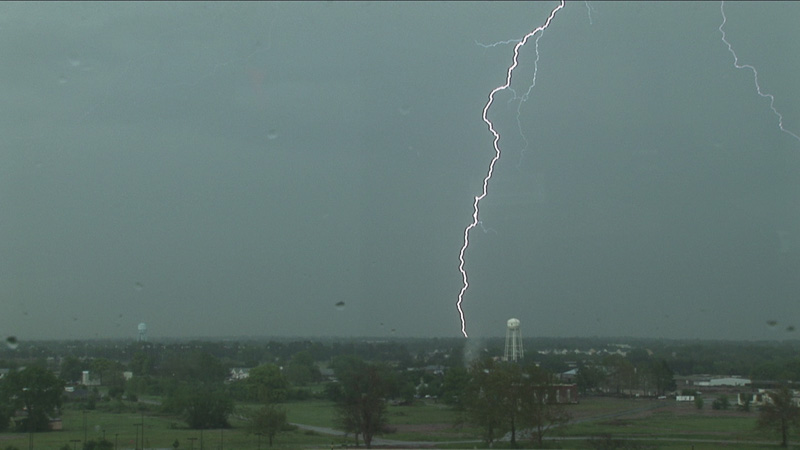 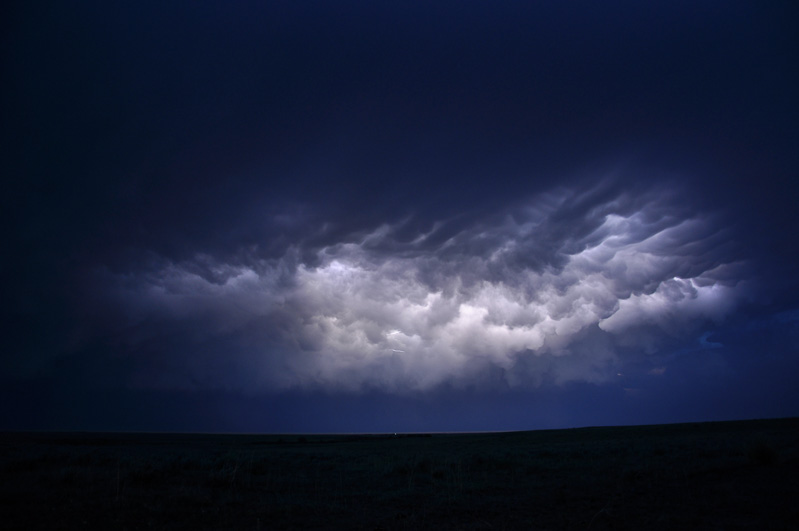 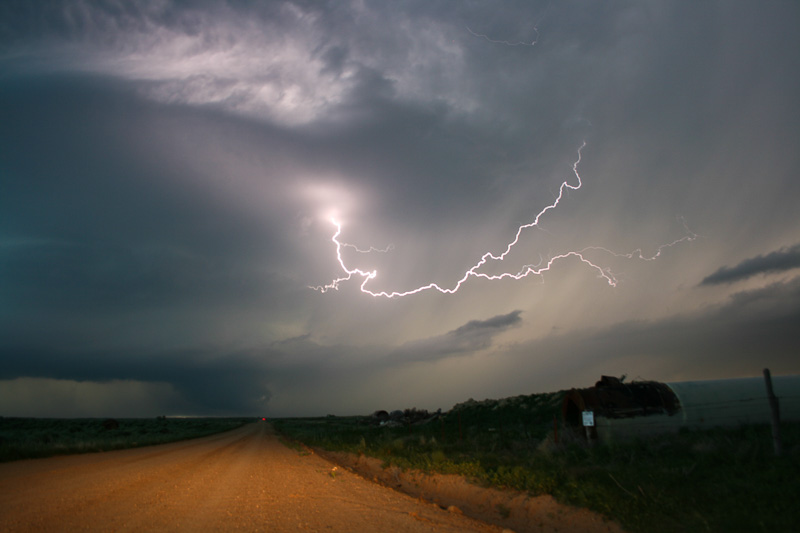 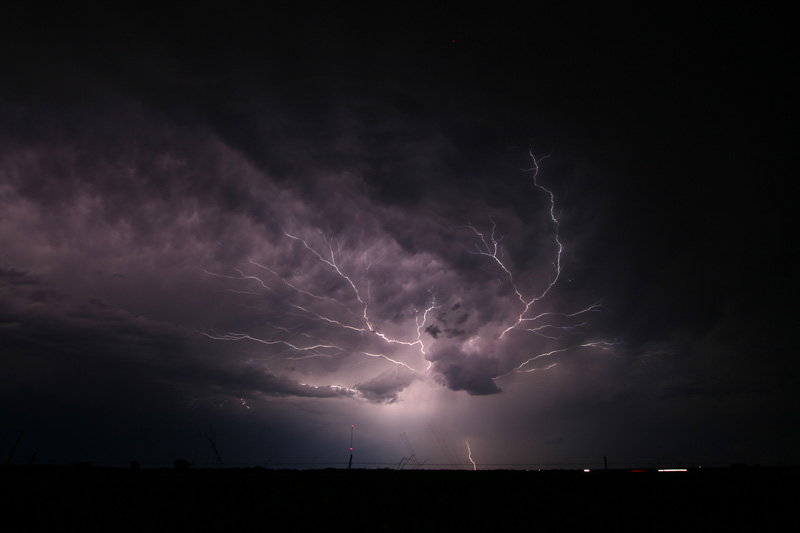 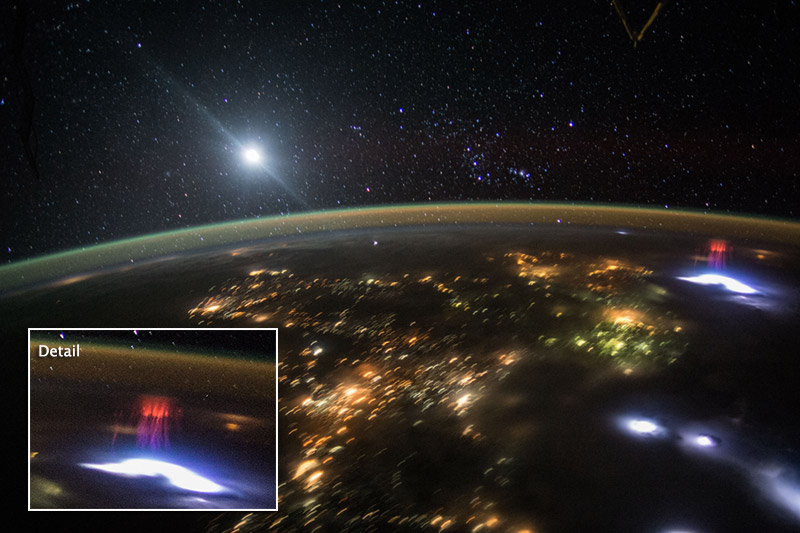