Flash floods are a worldwide hazard, and are the number one hazardous weather related killer in the United States. They occur when heavy rainfall in a short period of time causes water to rapidly rise. NSSL researchers include hydrologists and hydrometeorologists to address the complicated problem of forecasting and warning for these events.

NSSL researchers investigate the meteorological causes of flash flooding and develop tools to improve the science and forecasting behind heavy rainfall and flash flooding.

MRMS was transitioned into National Weather Service operations at the National Center for Environmental Prediction in 2014 and provides severe weather and precipitation products for improved decision-making capability within NOAA. The operational MRMS QPE products have high resolution and rapid-updating capabilities. The products are also used for verification of satellite rain products and for verification of quantitative rain forecasts from numerical weather prediction models. MRMS serves as a powerful tool for the creation and evaluation of new techniques, strategies and applications to improve QPE. As new concepts are developed, they can be tested within the real-time MRMS environment in the cloud. This process facilitates a rapid science-to-operations transition of new MRMS applications and products for flood and flash flood predictions and water resources management.

The FLASH project was launched in early 2012 largely in response to the demonstration and real-time availability of high-resolution, accurate rainfall rate estimates from the Multi-Radar Multi-Sensor project. FLASH introduces a new paradigm in flash flood prediction, using MRMS and producing flash flood forecasts with products generated as frequently as every 2 minutes. FLASH represents the first continental-scale flash flood forecast system in the world, with hydrologic model forecasts being run every 10 minutes. FLASH has almost 11 million grid points across the country improving its forecast. The primary goal of FLASH is to improve accuracy, timing, specificity, and severity levels of flash flood warnings in the U.S., thus saving lives and protecting infrastructure. The FLASH team is comprised of researchers and students who use an interdisciplinary and collaborative approach to achieve the goal. The FLASH system was transitioned to the National Weather Service in November 2016.

The MRMS Hydrometeorological Testbed Experiment (HMT-Hydro) is an ongoing summer experiment that began in 2014. The in-house experiment provides an opportunity to test out new approaches in flash flood forecasting. For a period of approximately 4 weeks, several National Weather Service forecasters participate during the week by using the experimental products in a real-time setting. They issue experimental flash flood watches and warnings throughout the day, and the research team and the forecasters subjectively evaluate the products the following day. The HMT-Hydro experiment has been successful in garnering essential feedbacks from eventual end-users, thus enabling the researchers to refine and optimize the products. The experiment also provides a rich environment for collaborations and forecaster training.

During the MRMS Hydrometeorological Testbed Experiment, researchers are investigating ways to increase flash flood lead times using ensemble rain forecasts from the Warn-on-Forecast system as inputs to FLASH. This will represent the world’s first coupled atmospheric-hydrologic modeling system that explicitly forecasts the precipitation and concomitant hydrologic response down to minutes at flash flood scale. Another major paradigm change is being explored. Through the use of ensemble precipitation forecasts, researchers are also advancing the FLASH system forecasts from being deterministic to fully probabilistic.

The ANCHOR project leverages remote-sensing solutions for unique hydrometeorological observations. The first component has developed an in-house prototype of a low-power, lightweight, low-cost, scanning LiDAR, which utilizes light rays and remote sensing to measure distance to objects. The LiDAR is used to retrieve a channel’s underwater topography by retrieving the distance from the instrument to the bottom of a stream from bank-to-bank. The second component is a NOAA-funded project that deployed 14 stream radars across the U.S. These sensors report river stage and velocity in real-time. This information can be combined with the topography data to enable direct estimation of a stream’s flow rate. The project represents a change in paradigm in that the sensors are not in contact with the stream, which improves safety and also enables real-time estimates of hydrologic variables without the need for costly measurements in the stream. The system can be readily deployed in a few hours; power is supplied by a small battery charged by a solar panel; the unit can be hung from a bridge or by cables; data are transmitted out by cellular network. All of these emerging technologies use remote sensing to advance the state of knowledge in hydrology.

NSSL scientists operated NOAA NSSL's mobile X-band dual-polarized radar, NOXP, in Colorado to collect data and analyze storm characteristics in the Gunnison river basin. The National Weather Service radar servicing the Gunnison area is located in Grand Junction, Colorado, at 9,991 feet, with 12,000-foot mountain peaks causing radar beam blockage at lower elevations to the southeast around the Gunnison area. The high-resolution data sets will provide insight into the variations of storm characteristics for different terrain profiles. The success of these mobile radar deployments ultimately led to the state funding of a permanent radar installation in Alamosa.

NSSL collaborates with other countries to improve flood and flash flood warnings. Since floods and flash floods kill more people in the U.S. each year than any other weather-related event, this relationship benefits U.S. efforts as well. Working together to develop better forecasting tools will save lives and property worldwide.

NSSL's work with Taiwan's Central Weather Bureau and Water Resources Agency, along with NOAA's Earth System Research Laboratory has resulted in the development of high-resolution QPE and the QPF — HRQ2 — system for Taiwan. The collaboration has been ongoing since 2002, with the goal of improving Taiwan's capabilities to issue flash flood and flood warnings and to improve river and reservoir water management. The HRQ2 system has been running in real-time at the CWB and more than ten other government agencies. The system continues to undergo development and enhancement.

Coastal and Inland Flooding Observation and Warning (CI-FLOW) is a collaborative prototype real-time system that predicts total water level in North Carolina. CI-FLOW captures the complex interaction between rainfall, river flows, waves, tides, and storm surge, and how they will impact ocean and water levels. CI-FLOW is being tested in real-time when coastal storms approach North Carolina. NOAA NWS forecasters have access to CI-FLOW during these events to provide feedback on how well the CI-FLOW system estimates total water level. NSSL, with support from the NOAA National Sea Grant leads the unique interdisciplinary team of federal, state, university and private partners.

Areas damaged by wildfires are known as burn scars and are particularly susceptible to flash floods and debris flows during rainstorms. Rainfall that is normally absorbed by vegetation can run off almost instantly, causing creeks and drainage areas to flood much earlier and with higher magnitude than normal. NSSL supplied real-time close-up radar mobile radar data during rain events in southern California where the local NWS radar beam is blocked by the terrain. The effort was part of the NOAA/USGS demonstration flash flood and debris flow early warning system to help forecasters improve flash flood and debris flow warnings in areas damaged by wildfires. 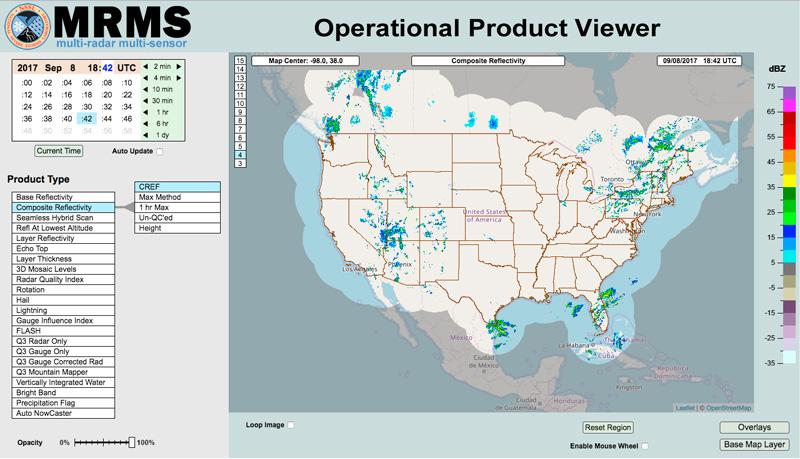 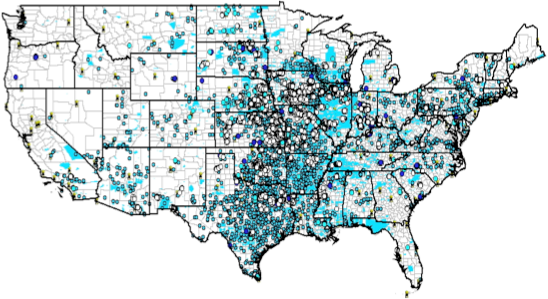 Observations of flash flooding have been combined into a consistent framework for the research community. The observations come from spotter reports from the National Weather Service, public survey responses from NSSL's SHAVE project, and from the entire archive of USGS stream gauging stations. [+]

Observations of flash flooding have been combined into a consistent framework for the research community. The observations come from spotter reports from the National Weather Service, public survey responses from NSSL's SHAVE project, and from the entire archive of USGS stream gauging stations. 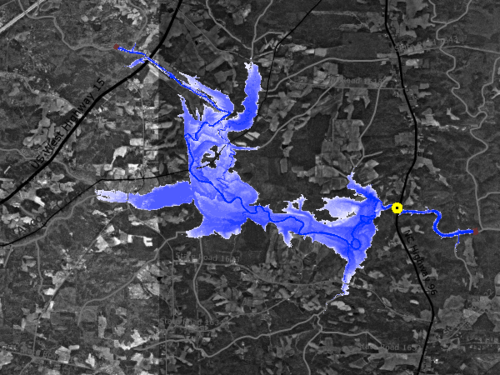 CI-FLOW stream-flow simulations are linked to inundation maps showing the expected extent and depth of water for a given river flood stage. [+]

CI-FLOW stream-flow simulations are linked to inundation maps showing the expected extent and depth of water for a given river flood stage. 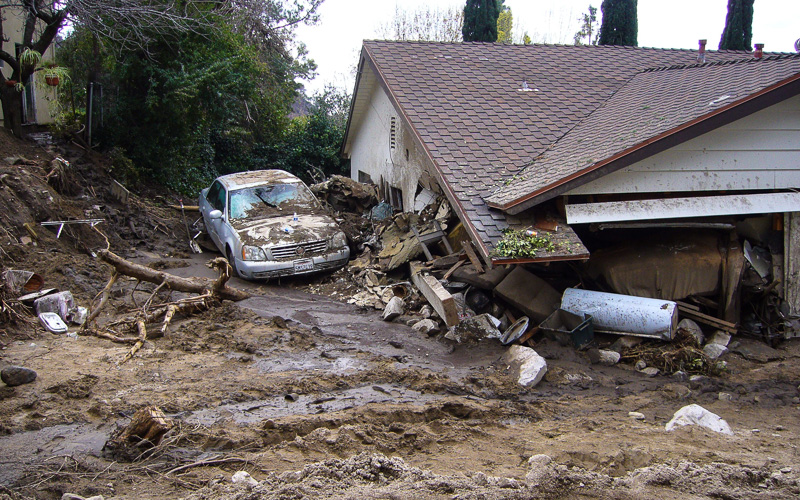