Flash floods are rapid increases of water in streams and creeks, typically in response to intense rainfall events, that pose significant hazards to motorists, recreationalists, people, and infrastructure worldwide. The small space-time scales associated with flash floods have made it challenging to predict the precise locations of impending rainfall and resultant impacts. 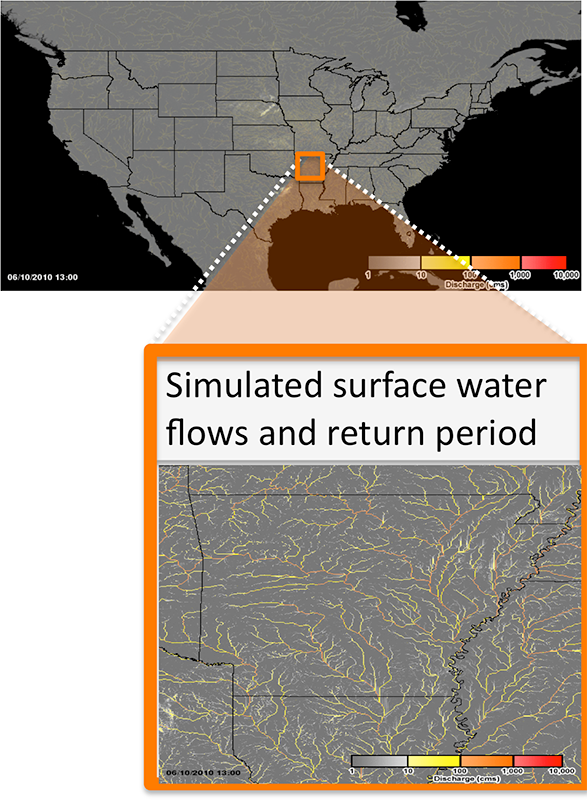 The CREST hydrologic model is used to produce forecasts of soil moisture, streamflow, and unit streamflow at 1 km/10 min resolution. [+]

The CREST hydrologic model is used to produce forecasts of soil moisture, streamflow, and unit streamflow at 1 km/10 min resolution.

The Flooded Locations And Simulated Hydrographs Project (FLASH) was launched in early 2012. The primary goal of the FLASH project is to improve the accuracy, timing, and specificity of flash flood warnings in the US, thus saving lives and protecting infrastructure. The FLASH system was demonstrated to double the skill over the legacy flash flood guidance system in the National Weather Service and was subsequently transitioned to the National Centers for Environmental Prediction in 2016 where it continues to serve as a leading tool for monitoring and predicting heavy rainfall events and concomitant flash flooding.

FLASH was launched largely in response to the demonstration and real-time availability of high-resolution, accurate rainfall observations from the Multi-Radar Multi-Sensor project (MRMS). FLASH introduces a new paradigm in flash flood prediction that uses the MRMS forcing and produces flash flood forecasts at 1-km/10-min resolution through direct, forward simulation.

From its inception, FLASH has been designed within an Ensemble Framework For Flash Flood Forecasting (EF5) to accommodate multiple forcings from rainfall observations to precipitation nowcasts to stormscale Numerical Weather Prediction forecasts, multiple model structures and parameter settings, and newly developed Artificial Intelligence and Machine Learning techniques for yielding probabilistic outputs. The FLASH team is comprised of researchers and students who use an interdisciplinary and collaborative approach to achieve the goal.