NOAA National Severe Storms Laboratory researchers have created a computer model that can simulate a thunderstorm to study how changes in the environment can affect a thunderstorm’s behavior. They also contributed to the development of the Weather Research and Forecast (WRF) model used in both research and National Weather Service operations.

Recent advances in computing technology have enabled use of numerical weather prediction models with high enough resolution to adequately depict individual thunderstorms across very large areas, such as the entire continental United States. These models, known as convection-allowing models, or CAMs, are extremely valuable to forecasters. CAMs provide information on storm types, which are strongly related to expected hazards. Despite the scientific advances enabled by CAMs, many unresolved research questions need to be addressed to fully exploit the information from CAMs and provide reliable probabilistic information to forecasters. A large amount of NSSL research is devoted to these studies.

The Weather Research and Forecast (WRF) model, a precursor to modern CAMs, is the product of a unique collaboration between the meteorological research and forecasting communities. Its level of sophistication was appropriate for cutting edge research, yet it operated efficiently enough to produce high-resolution guidance for front-line forecasters in a timely manner. Working at the interface between research and operations, NSSL scientists were major contributors to WRF development and provided leadership in the operational implementation and testing of WRF. The NSSL WRF generated daily, real-time one to 36 hour experimental forecasts of precipitation, lightning threat, and more, at a 4-km resolution.

The NSSL COllaborative Model for Multiscale Atmospheric Simulation (COMMAS) is a 3D cloud model capable of recreating thunderstorms for closer study. COMMAS can ingest radar data and lightning data from past events. Researchers use COMMAS to explore the microphysical structure and evolution of the storm and the relation between microphysics and storm electricity. They also use COMMAS to simulate different phases of significant events, such as the early tornadic phase of the Greensburg, Kansas supercell that destroyed much of the town in May 2007.

The Flooded Locations And Simulated Hydrographs Project (FLASH) was launched in early 2012 largely in response to the demonstration and real-time availability of high-resolution, accurate rainfall observations from the Multi-Radar Mutli-Sensor (MRMS) platform. FLASH introduces a new paradigm in flash flood prediction. FLASH uses MRMS surface rainfall data as input to the hydrologic model and produces flash flood forecasts at 1-km/5-min resolution through direct, forward simulation. The primary goal of the FLASH project is to improve the accuracy, timing, and specificity of flash flood warnings in the United States, thus saving lives and protecting infrastructure. The FLASH team is composed of researchers and students who use an interdisciplinary and collaborative approach to achieve this goal. 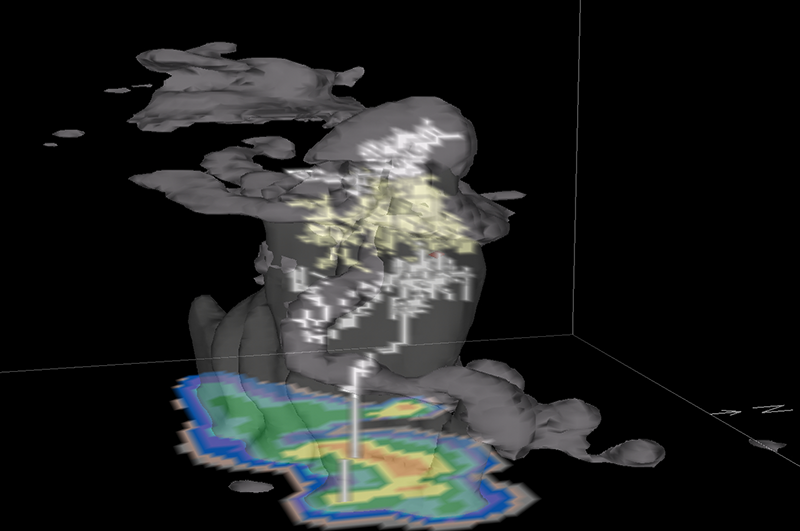 NSSL's COMMAS model can simulate lightning in a storm. [+] 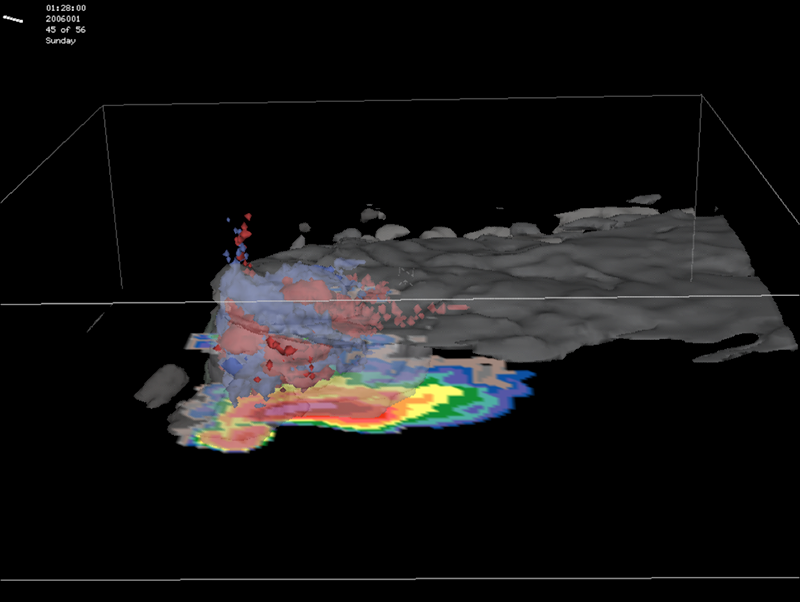