“Accumulated rainfall” is an estimated amount based on radar-measured rainfall intensity and rain gauge observations.

Unfortunately, these tools cannot accurately show how much rain actually fell and how the rainfall amounts were distributed. Radar has excellent resolution, but radar cannot scan at the surface of the earth. Also, radar coverage is inconsistent from place-to-place and storm-to-storm. Rain gauges can be more accurate than radar, but they are usually spread too far apart to accurately show how rainfall is distributed.

CI-FLOW uses data from the NWS’s Weather Prediction Center (WPC) to forecast the amount of precipitation that will fall over the Tar-Pamlico and Neuse River basins. 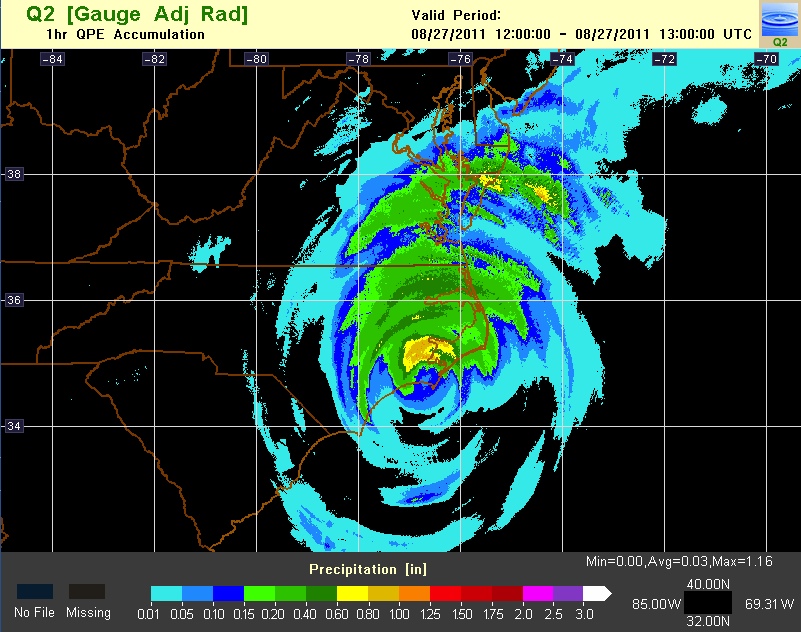 Hurricane Irene, as observed by the Q2 system. [+]

Hurricane Irene, as observed by the Q2 system.

CI-FLOW uses data from NSSL’s Multi-Radar Multi-Sensor system, most commonly referred to as MRMS/Q3, to estimate the amount of rainfall that has fallen over the Tar-Pamlico and Neuse River basins. MRMS/Q3 combines data from radars and rain gauges to generate rainfall estimates over an area. This multi-sensor technique combines the most desirable aspects of rainfall estimation into one product. The MRMS/Q3 rainfall estimates are fed into a model that predicts which streams and rivers will flood.