A significant part of NSSL’s specialized field instrumentation is built, managed and maintained by an experienced group of problem-solvers on the Field Observing Facilities Support team who work hard to come up with innovative ways to support NSSL scientist’s storm research efforts.

The mobile mesonet is a vehicle intended to take surface observations of temperature, pressure, humidity, wind, and even solar radiation in and around storms and storm environments. Originally designed in 1992 by scientists and technicians from NSSL and The University of Oklahoma, these “probes” have undergone significant improvements over the years. Now, highly modified trucks are used to take these observations using a custom-designed roof rack and a complex of computer and communication equipment. Given that operating in severe weather comes with severe weather hazards, researchers added a hail cage to the vehicles to protect the windshields from damage.

In addition to surface observations, upper air observations are a critical component of meteorological observations. The National Weather Service launches weather balloons twice a day from locations across the country to measure vertical profiles of temperature, pressure, humidity, and winds. These observations form the backbone of numerical weather prediction and give us a picture of what the vertical component of the atmosphere looks like. Given this importance, the NSSL mobile mesonets now have the capability to launch soundings from any location at any time. The vehicles carry helium tanks in the back, and researchers can launch a balloon within a few minutes after arriving at a location.

NSSL researchers teamed up with The University of Oklahoma to build the first mobile Doppler radar in 1993. Current mobile radars (for example, NSSL’s NOXP) can be parked very close to storms, observing details that are typically below the beam of distant WSR-88D radars.

Observations on the Go: The NOXP Mobile Radar. Watch video about the NOXP and more on the NOAA Weather Partners YouTube Channel»

Learn more about the CLAMPS instrument →

Observations on the Go: The CLAMPS Vehicle. Watch video about CLAMPS and more on the NOAA Weather Partners YouTube Channel»

In addition to the Mobile Mesonet, NSSL’s LIght Detection And Ranging (LiDAR) truck allows use of up to 2 mobile Doppler LiDARs. This allows for observations of near surface winds in the boundary layer during non-precipitating conditions (by observing the movement of aerosol particles) to enhance the observational capabilities of the vehicle. The system is self-leveling up to ±30º and can be configured with 1 or 2 independent LiDAR systems to allow a variety of data collection strategies.

NSSL leases a Chevrolet Tahoe that is primarily used for servicing the Lightning Mapping Array (LMA) network. It is also used to transport equipment and personnel to very remote, special projects.

The 2DVD is used in polarimetric radar studies. It records two-dimensional images of any particles falling through its imaging area. It measures rain drop size distribution, rain rate and other parameters useful in refining precipitation identification algorithms.

The Portable In situ Precipitation Stations are small portable weather platforms built by NSSL in collaboration with The University of Oklahoma and Purdue University. Each PIPS has sensors that measure temperature, pressure, humidity, wind speed and direction. In addition, the PIPS determines the distribution of particle sizes by using an instrument called a Parsivel (PARticle, SIze, VELocity) disdrometer to measure the number and size of any object that falls through it (similar to the 2DVD). These can be deployed quickly in the field in any condition, and have even been used in hurricanes!

In addition to surface observations, upper air observations are a critical component of meteorological observations. Given this importance, NSSL mobile mesonets have the capability to launch soundings from any location at any time. The vehicles carry helium tanks in the back, and researchers can launch a balloon within a few minutes after arriving at a location. Measurements from the packages of weather instruments attached to the balloons provide actual weather data from inside the storm where it is too dangerous for research aircraft to fly.

NSSL/FOFS has built a one-of-a-kind, balloon-borne instrument called the Particle Size Image and Velocity probe, designed to capture high-definition images of water and ice particles as it is launched into, and rises up through, a thunderstorm. The instrument is flown as part of a “train” of other instruments connected one after another to a large balloon. These other instruments measure electrical field strength and direction, and other important atmospheric variables such as temperature, dew point, pressure and winds. Data from these systems helps researchers understand the relationships between the many macro and microphysical properties in thunderstorms.

NSSL/FOFS has a collection of Electric Field Meters that are attached to balloons and launched into storms to help learn more about the electrical structure of storms.

NSSL is helping pave the way for using Uncrewed Aircraft Systems (UAS) platforms for severe weather research. Using uncrewed platforms allows observations to be taking in locations and from vantage points not reachable by other means. Doing everything from in situ observations to damage survey photos, NSSL is proving that UAS platforms are an invaluable asset to our observational arsenal.

The VHF antenna receives signals in the channel three television band. This signal is processed by electronics in a small plastic building to determine the time the signal is received to within less than a millionth of a second. This time and information about the signal is then sent back to a central processor in Norman via the communication antenna beside the plastic building. The central processor records the information from all stations and, in real time, uses the times from several antennas to determine the three-dimensional location from which a lightning channel segment radiated the signal. These data are being used with radar and other storm measurements in scientific studies to help understand how thunderstorms produce lightning and to develop ways of using lightning mapping data to warn and forecast of weather hazards.

Mobile versions of the fixed OKLMA sites have been created that are rapidly deployable. Running off battery and solar power, these stations can be utilized as a deployable network in advance of expected electrically active weather.

NSSL uses special instruments mounted on the top of the National Weather Center that can measure the thermodynamic properties of the lowest 1-2 kilometers of the atmosphere, known as the boundary layer. These instruments include:

Researchers study the data to learn more about the structure of the boundary layer, shallow convective cloud processes, the interaction between clouds, aerosols, radiation, precipitation and the thermodynamic environment, mixed phase clouds, and more. Numerical models, such as those used for climate and weather prediction, have large uncertainties in all of these areas. Researchers also use these observations to improve our understanding and representation of these processes.

The National Weather Center Vehicle High Bay is divided into an east and west section with a cinder block wall and high shelving dividing the two areas. Work on University of Oklahoma radar vehicles typically is done on the east half of the bay. The west side is primarily used by NSSL for building, modifying and staging Mobile Laboratory vehicles, Mobile Mesonet vehicles and storm ballooning project systems and equipment.

The NSSL Machine Shop is a 35 by 30 foot, high ceiling area that houses all of NSSL's machine equipment, tools and project assembly work benches. Equipment consists of:

Safety is always an important consideration in any machine shop for both the work environment and operator habits. To be an authorized user of the NSSL machine shop, an applicant must view a series of online machine safety videos and be approved by FOFS with a demonstration of skill. Machine shop users' techniques are also frequently monitored by FOFS personnel. 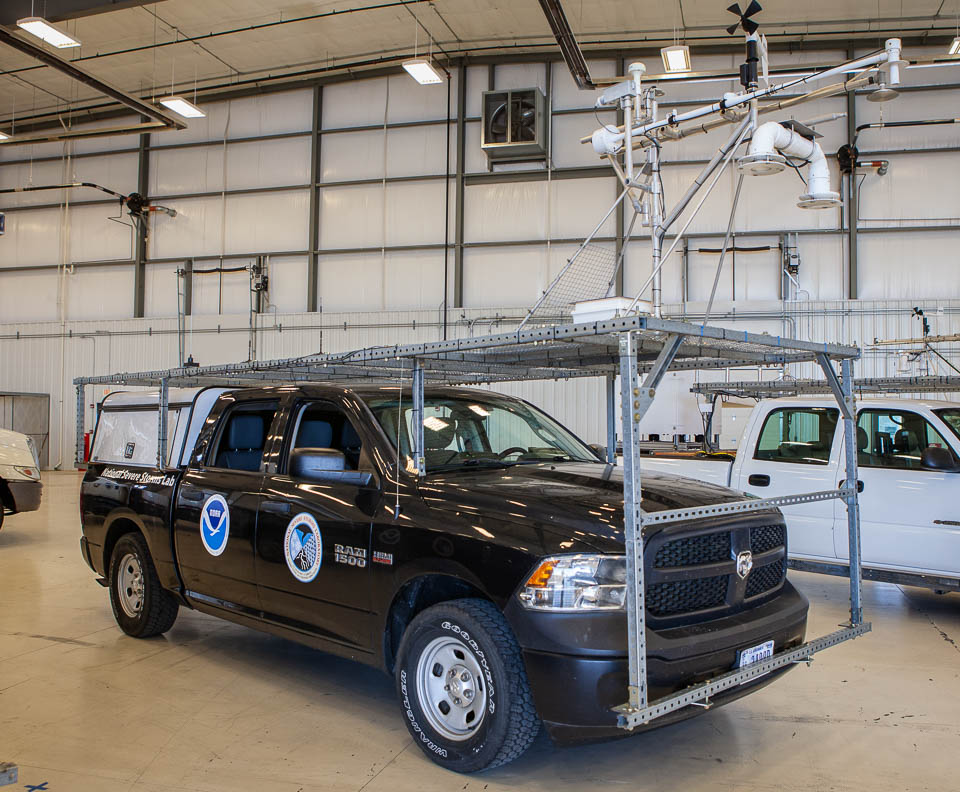 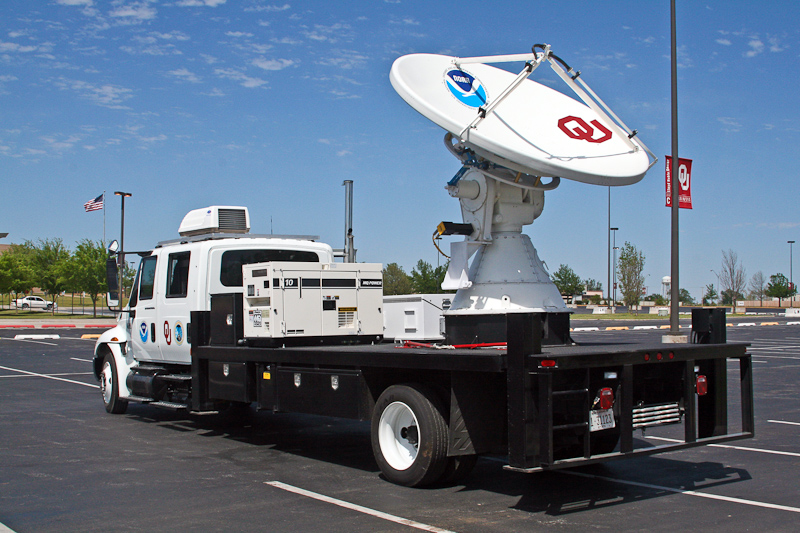 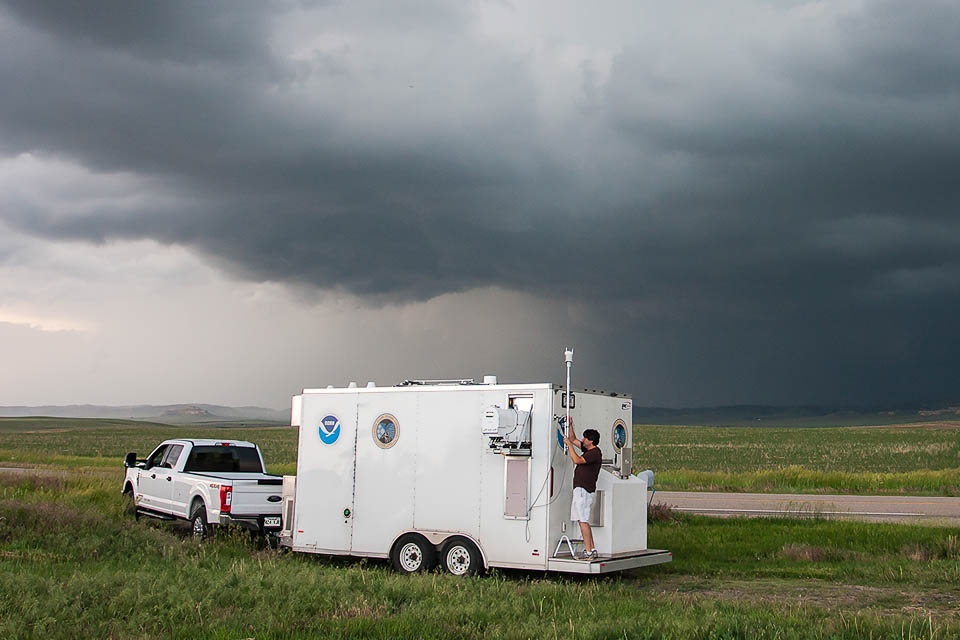 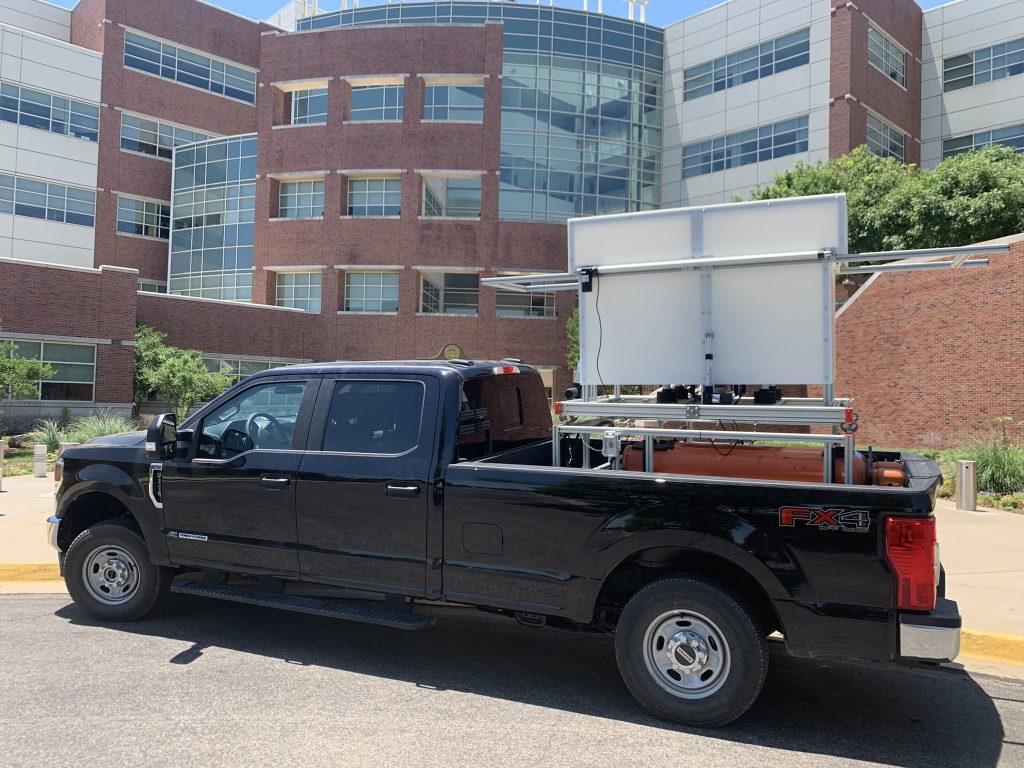 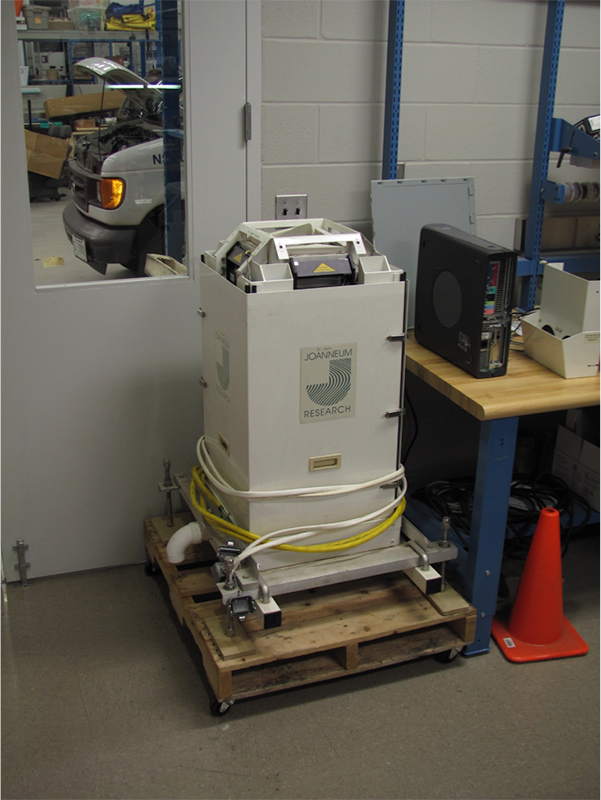 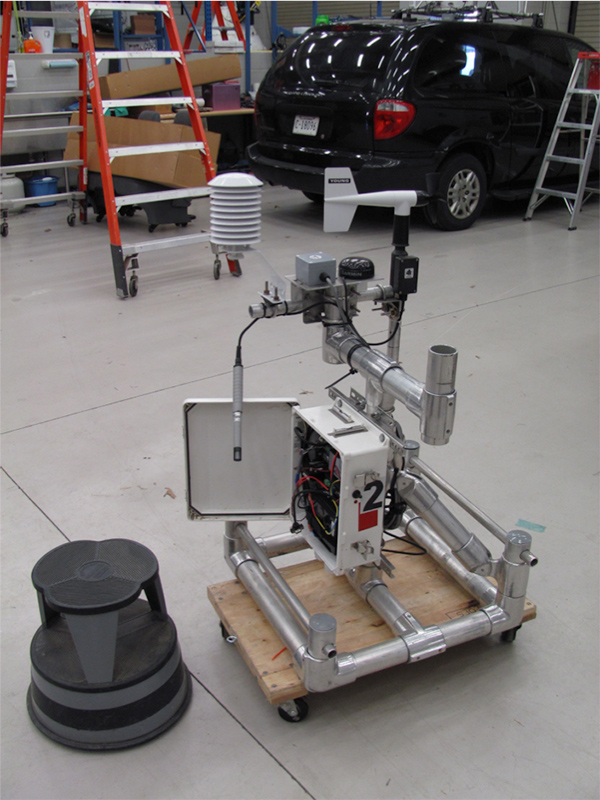 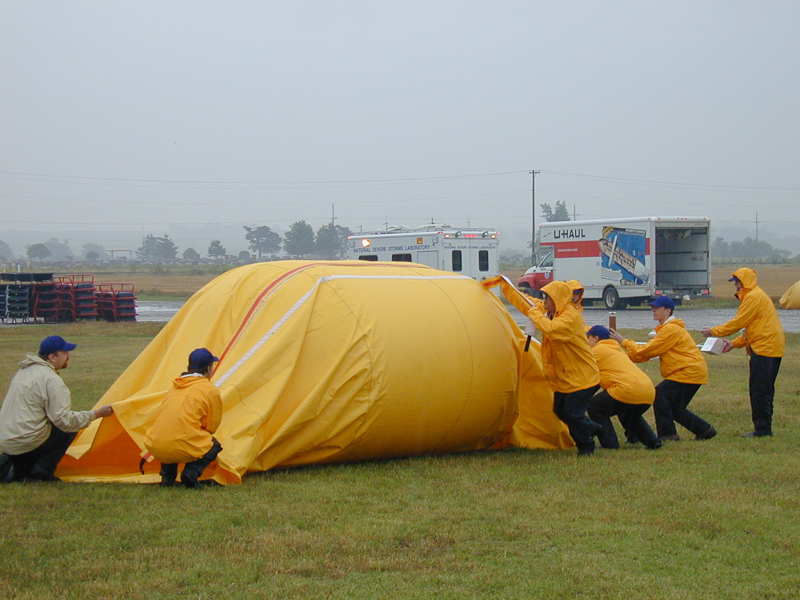 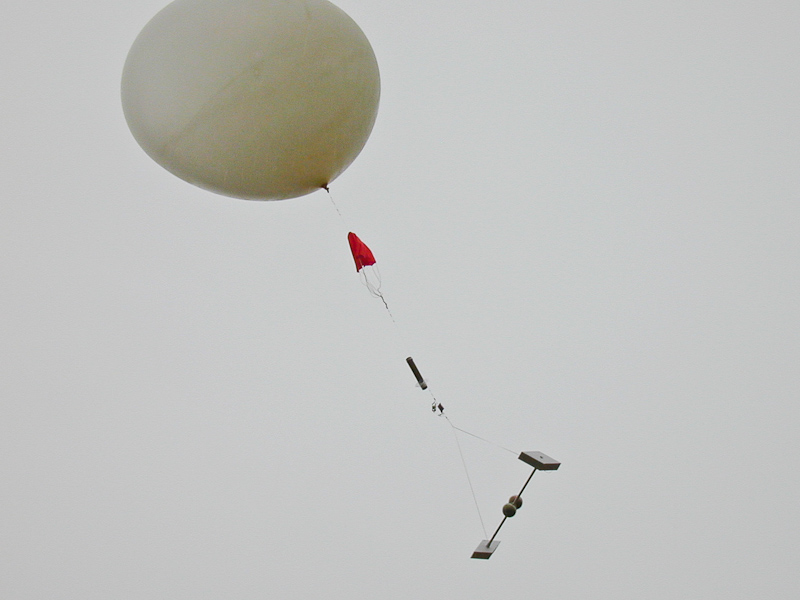 Instrument package connected to a weather balloon, including an electric field meter [+] 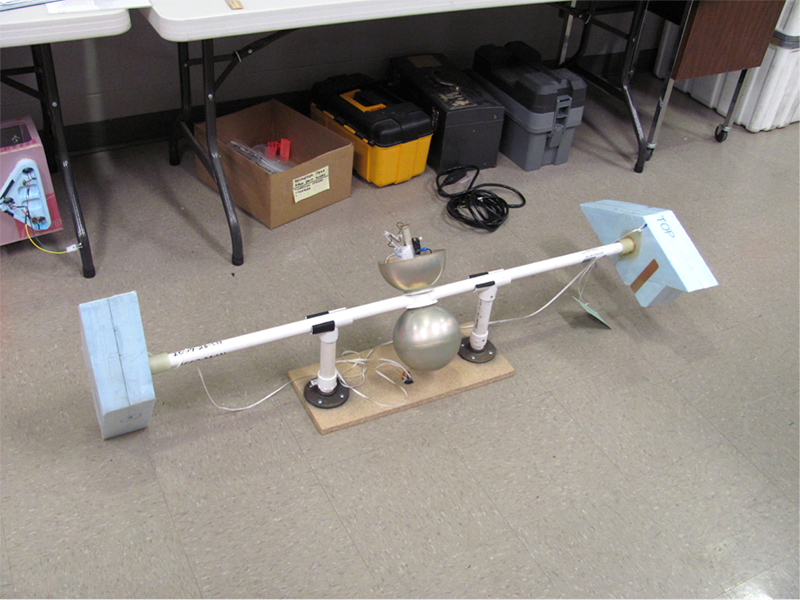 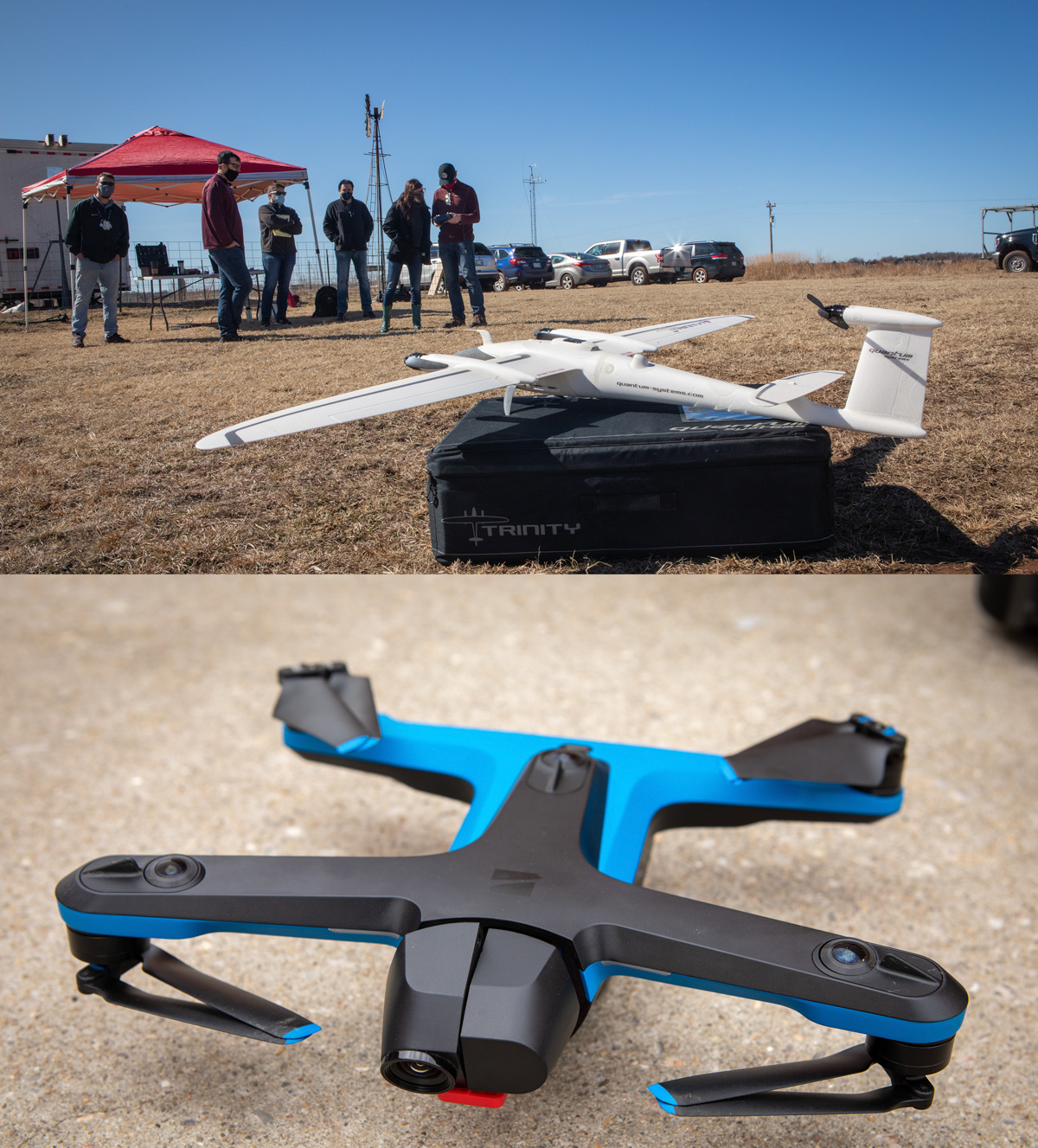 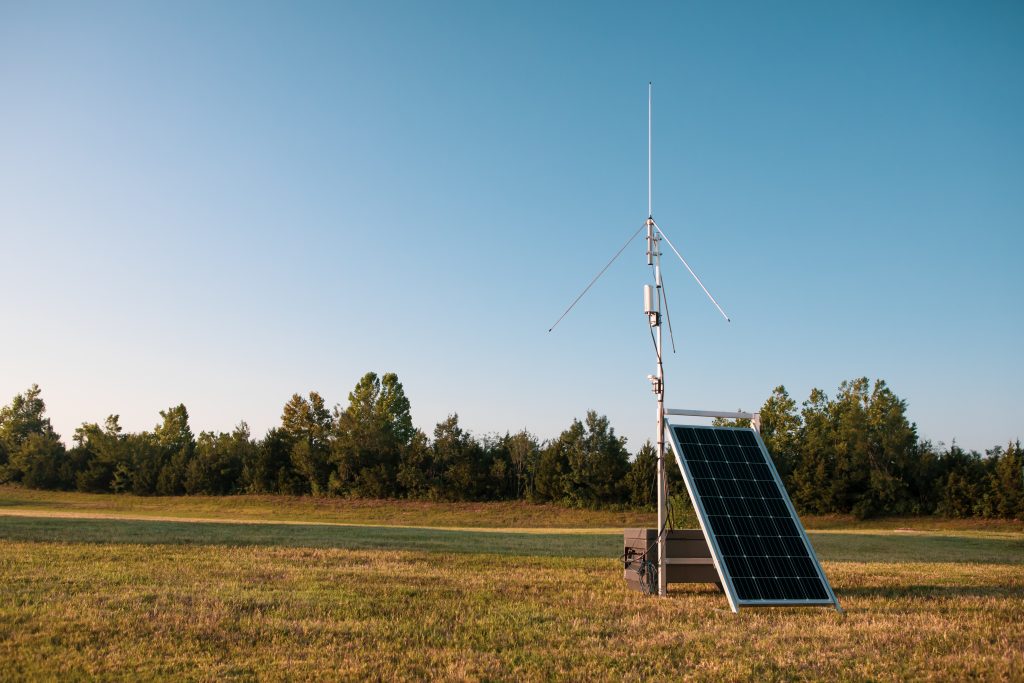 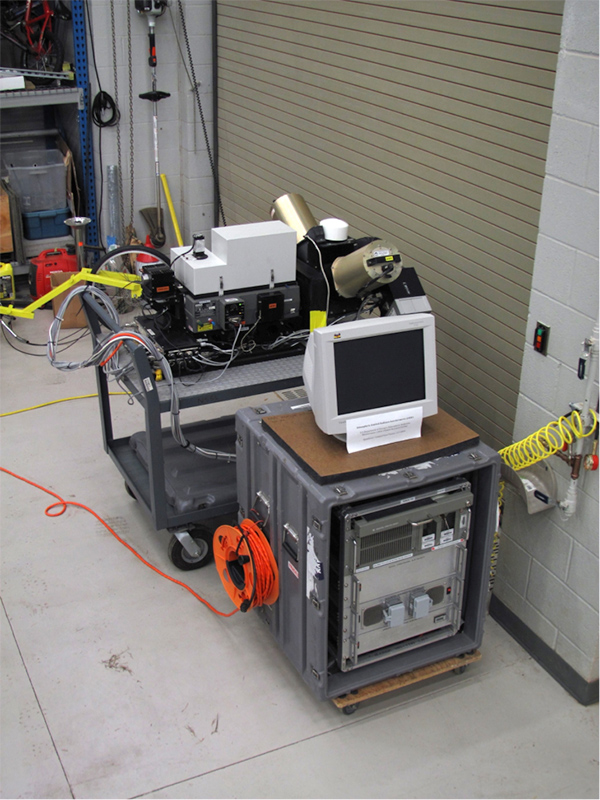 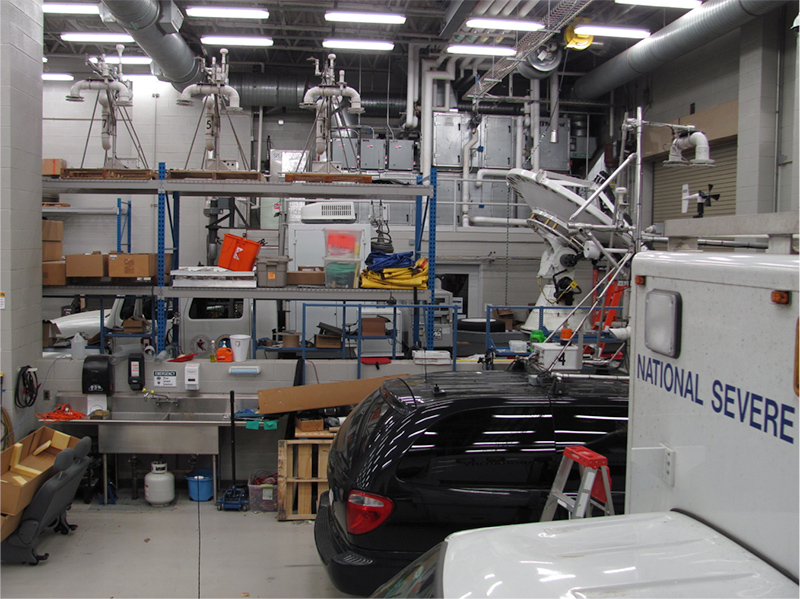