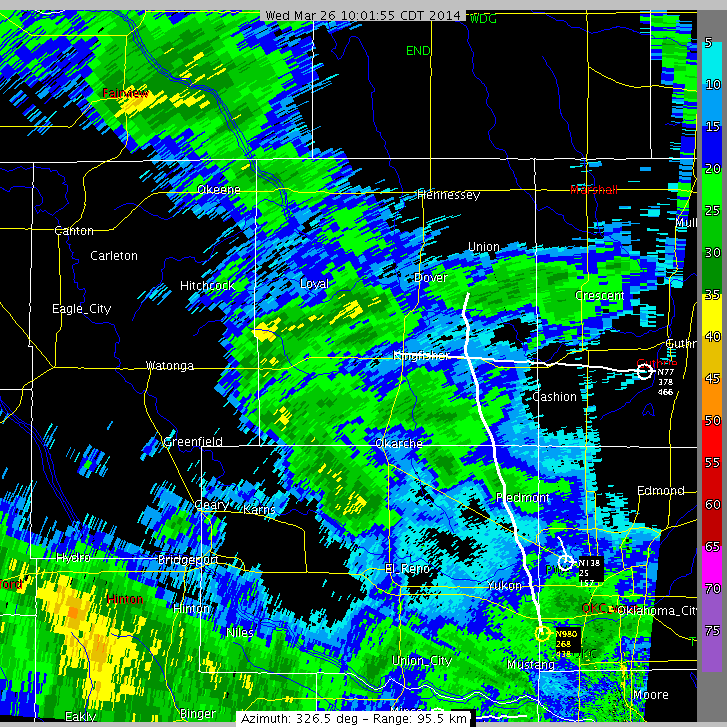 Example of integrated display of weather and aviation information with the multifunction NWRT PAR. [+]

A multifunction capability was developed for the NWRT PAR to demonstrate simultaneous weather and aviation functions using a deterministic aviation scan interlaced with adaptive weather scans. In the multifunction schedule, the aviation scan periodically interrupts weather scans at dwell boundaries. The aviation scan covers a 90° azimuthal sector and scans discrete elevation angles from 0.5 to 20°. Azimuthal and elevation samplings provide full coverage with the minimum number of beams using a fixed scan time of ~2.4 s. Thus, a 50-50 share between scan types can be used to obtain the required aircraft-tracking update time of ~4.8 s. Data acquired with weather and aviation scans are appropriately tagged at the real-time controller (RTC) so that they can be distributed to separate processing modules. The aviation module consists of detection and tracking algorithms. The aircraft detection algorithm identifies moving point targets using data acquired with very short dwell times and is robust in the presence of weather and ground clutter. The aircraft tracking algorithm uses a short-term history of potential moving targets identified by the aircraft detection algorithm. It compares current detections to previous detections and performs target associations based on maximum and minimum speed thresholds. The real-time display in the radar user interface was modified to provide integrated weather and aviation information.

A capability to adapt the vertical sampling of storms according to their range has been added to the NWRT PAR. Prior to this, a fixed scanning strategy was used for both focused and non-focused scanning; only the sector width could be changed for focused storm scanning. The purpose of this new capability is to evaluate the “one size fits all” approach typically used by operational radars to scan weather. A demonstration of this capability is expected to provide important information to determine if better vertical sampling of a storm can lead to earlier and improved detection of severe weather signatures that could translate into faster and more accurate warnings. 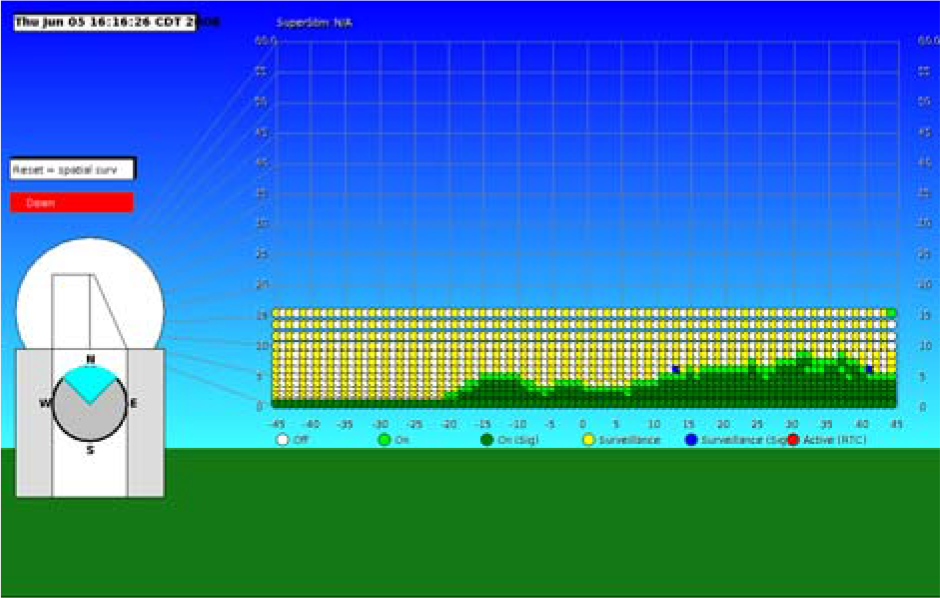 Example of the classification of beam positions with ADAPTS II through the NWRT PAR user interface. [+]

Focused observations provide a means to reduce update times with no sacrifice in data quality or spatial coverage by devoting less radar time to regions of reduced interest (e.g., clear air), thus reducing the total scan time. Scientists at the NSSL have been exploring the high-temporal resolution weather scanning capabilities of the agile-beam NWRT PAR for a number of years. Fast adaptive scanning with the NWRT PAR was first demonstrated with the development and real-time implementation of the Adaptive DSP Algorithm for Phased-Array Radar Timely Scans (ADAPTS). ADAPTS works by detecting regions with significant weather returns in real time; that is, it classifies individual beam positions within a scanning strategy as active or inactive based on two criteria: return significance and neighborhood.

Typically, in severe weather situations, meteorologists use radar to monitor and track the most intense storms. Traditional scanning strategies do not discriminate between regions of active and inactive weather, devoting equal attention to the two. ADAPTS has proven useful in reducing scan update times by focusing scanning in regions with active weather. However, in situations of widespread precipitation, ADAPTS does not differentiate between stratiform and convective regions. It is the convective regions that meteorologists are typically most interested in and identifying them is an important step in defining focused scanning strategies to reduce update times. A cluster identification algorithm has been implemented to identify these regions.

An important part of adaptive scheduling is the ability to track weather features. Since the NWRT PAR employs a single antenna, it is limited to scanning a 90-degree azimuthal sector at any given moment. In addition, the position of storms within the azimuthal sector changes in time. A weather tracking algorithm has been developed that tracks weather features and commands the antenna to a new position to keep features of interest inside the field of view. 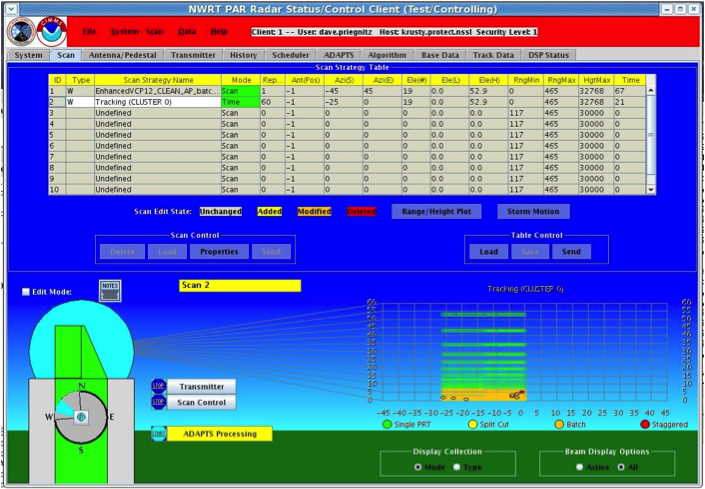 The capability to schedule focused scans on specific storms and adaptively track them has been added to the NWRT PAR software. The scheduling algorithm utilizes the cluster identification and weather tracking algorithms to define a storm cell and its relative position with respect to the antenna field of view. As the storm moves, the scanning sector is updated. If necessary, the weather tracking algorithm commands the antenna to a new position to keep the storm inside the field of view. 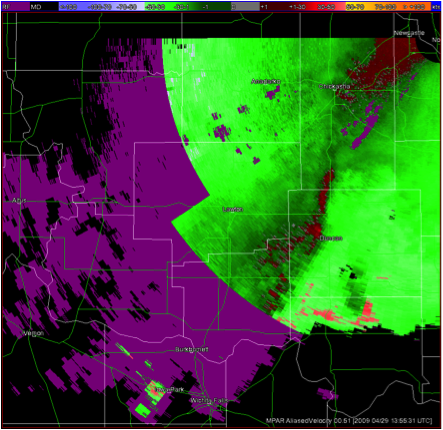 Radial velocities are important in identifying and locating hazardous weather such as microbursts, strong winds, and tornadoes. In some instances, radial velocities cannot be determined due to contamination from distant storms. It is possible to reduce the contamination by adjusting the pulse repetition time (PRT) of the pulses used to calculate radial velocity. An algorithm has been developed that applies an optimal PRT for minimizing the contamination inside a sector. A manual adjustment is also supported through the user interface.