Have you ever watched tornado footage on TV and wondered what caused the tornado, or why it formed where it did? Meteorologists are also interested in answering that and many more questions about tornadoes.

In the springs of 1994 and 1995, scientists at the NOAA National Severe Storms Lab began searching for answers as to how tornadoes form. They gathered data in the field – meeting the storms head on. This was called VORTEX, or the Verification of the Origins of Rotation in Tornadoes Experiment. Don Burgess, a research scientist, working with the lab, reflects on his involvement with this project.

Burgess: “The first VORTEX was our big experiment – first time with mobile radars, lot more mobile instrumentation than ever before, mobile Mesonets instead of stationary Mesonet sites – to go out and study super cells in great detail.”

Traveling through parts of Texas, Oklahoma, and Kansas, meteorologists planned to target a single storm each day to gather data. For the first time ever, VORTEX successfully documented the entire life cycle of a tornado. Between May and June of 2009 and 2010, many meteorologists from across the country will again be heading out to study tornadoes. This project, named VORTEX2, will be take place in the Central Plains. Areas of focus include southern South Dakota, western Iowa, eastern Colorado, Nebraska, Kansas, the Texas panhandle and western Oklahoma. The VORTEX2 Operation Center will be at the National Weather Center in Norman, Oklahoma. This field project will not only have scientists from the NOAA National Severe Storms Lab, but will also include participants from about a dozen universities and non-profit organizations. VORTEX2 is an $11.9 million dollar program funded by the National Science Foundation and National Oceanic and Atmospheric Administration. Meteorologists will be trying to understand why, when, and how tornadoes form.

Burgess: “VORTEX2 is this once-in-a-decade expenditure that we have had historically and will have again where we put a lot of effort into a detailed study. We really want to get an incremental increase in basic understanding. This is focused towards super cells. They are important b/c they spawn the worst and most significant tornadoes. Tornadoes do come from other systems besides super cells. They deserve study as well but the big ones and the bad ones come from super cells so we want to understand them first and tornado genesis. Although we've made progress, we still really don't understand everything so this is an important field program that is upcoming.

Numerous special vehicles will be used for VORTEX2. There will be at least ten mobile radars in the field. These are large trucks equipped with weather radars that can be driven anywhere around the storm or tornado. Nine mobile mesonets, which are cars with various weather instrumentation attached to their roofs, will help efficiently collect data. The project will also include four vehicles with the capability of launching weather balloons into various locations of a storm. This is crucial for fully understanding the atmosphere. This impressive fleet of storm vehicles will be hard to miss as they drive towards severe storms this spring. Lou Wicker, a research meteorologist, will be organizing the National Severe Storms Lab's role in this program

Wicker: This is probably one of the largest field programs for severe storms in the last twenty years. We are looking at approximately eight or nine universities, NCAR, and probably up to eighty to one hundred people involved in this. An armada on the road of about 40 vehicles. National Weather Service forecasters are volunteering their time to help forecast. All sorts of individuals that are closely tied to the severe storm research community. We are very excited about that. We feel very lucky to do this and we're hoping to push the envelope pretty far out there.

There is also some cutting edge technology being used in the way of unmanned instrumentation. Some of these include Tornado PODs and Sticknets, which meteorologists will attempt to place as close to where they expect tornadoes to form as possible. These devices are able to measure wind speed and direction, record hail and precipitation, as well as measure other important atmospheric variables. Another interesting piece of equipment is the unmanned instrumented aerial system. This will be flown across outflow boundaries and beneath rotating thunderstorms to measure pressure, temperature, relative humidity, and wind speeds. All of this instrumentation together, with a variety of vehicles, should provide an amazing amount of storm data to investigate. VORTEX2 is the largest and most ambitious field project ever to collect data on tornadoes. It will involve nearly 100 scientists and students. The hope is that the data gathered will one day allow National Weather Service forecasters to understand, with plenty of lead time, which specific storms will produce tornadoes.

Imagine getting a warning with details such as when and where a tornado will touch down, how long it will last, and how intense it will be. These are the ambitious goals of VORTEX2. 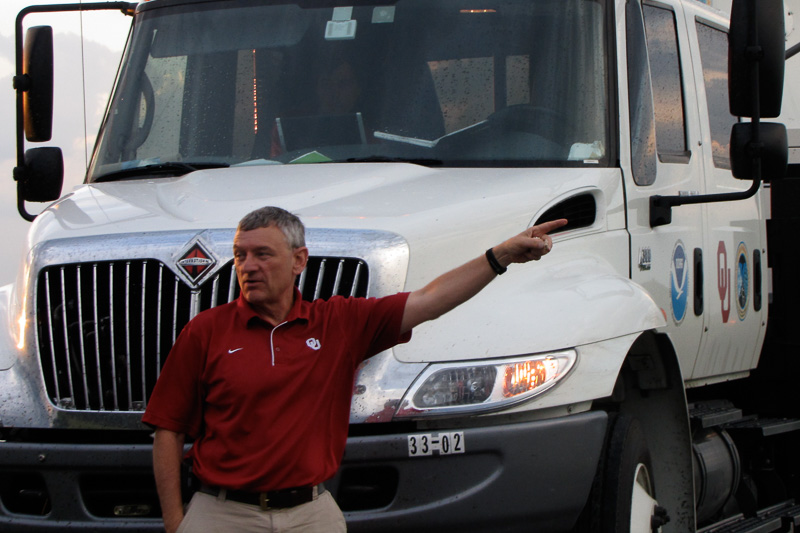 Don Burgess in the field [+] 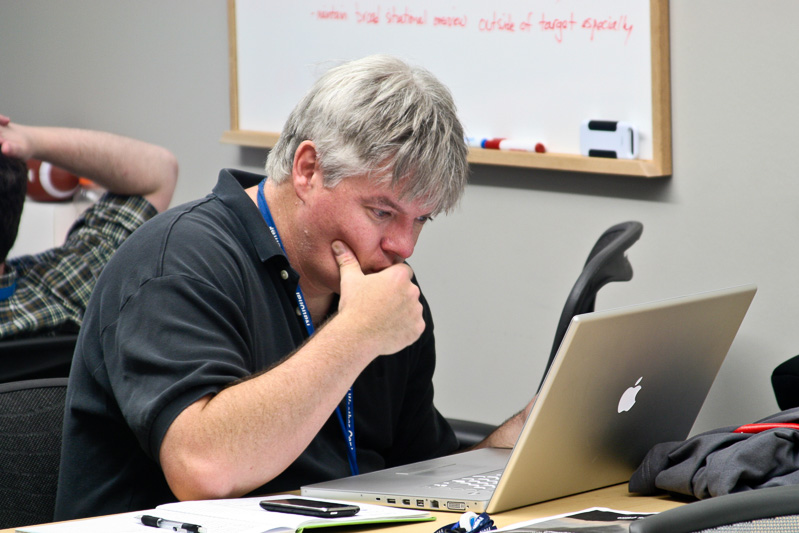 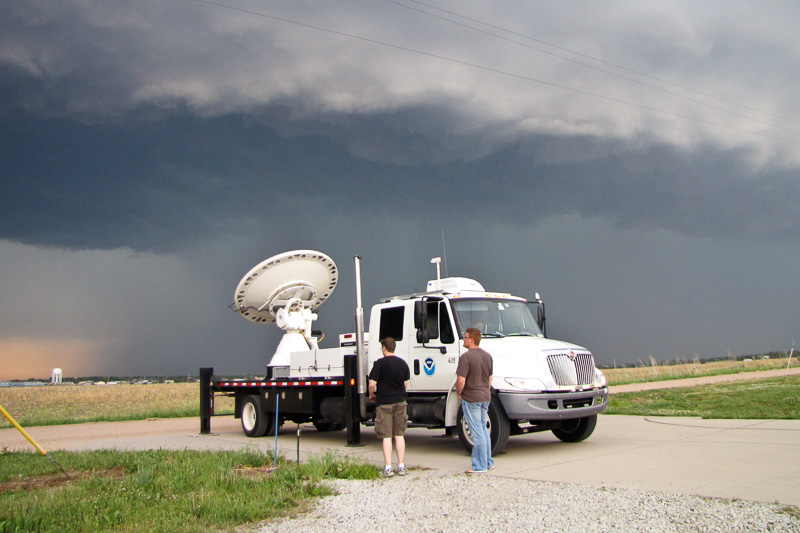 Researchers in the field with the NOXP mobile radar. [+] 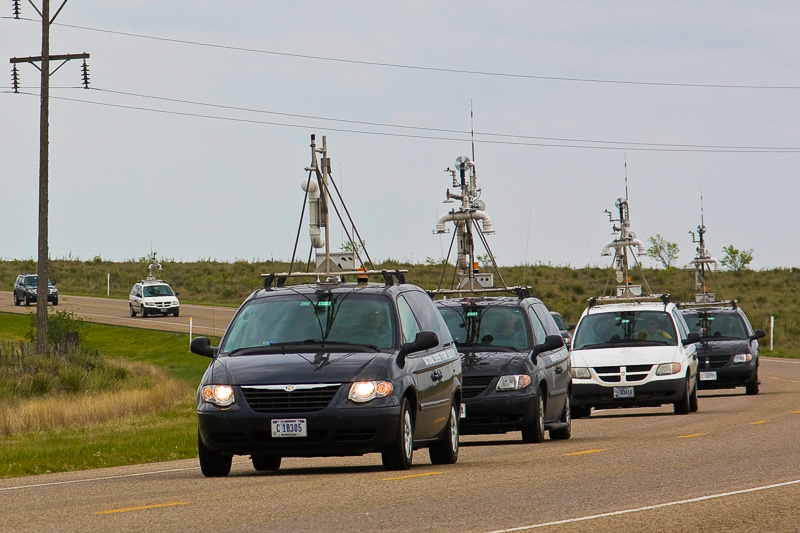 Mobile mesonets on the road. [+] 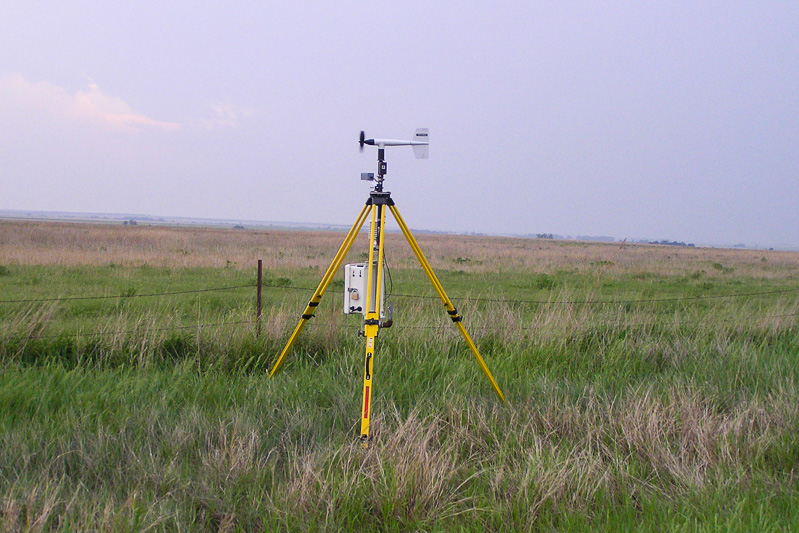