ANDRA: May 3rd of '99 was a day that started off much like any severe weather day in Oklahoma. There was a risk of severe thunderstorms, chance of tornadoes, going to be a likelihood of some hail and strong winds.

That was Dave Andra, the Science Operations Officer for the Norman National Weather Service Forecast Office. As he recalls that historic day so vividly, itís amazing to think that ten years have passed.

As the forecast office continued monitoring the surrounding weather, the NOAA Storm Prediction Center had a slight risk out in western and central Oklahoma. This meant they expected some thunderstorms, but nothing out of the ordinary. By mid-morning, things were beginning to change. Moisture was streaming north into Oklahoma and Kansas. Weather maps were showing the atmosphere was becoming unstable and suitable for tornadoes.

At 11:15 a.m., the slight risk area had been upgraded to a moderate risk. Forecasters were starting to suspect something more significant could occur that afternoon. An hour later, the Norman Forecast Office upgraded their thunderstorm outlook, noting the likelihood for supercell thunderstorms with isolated tornadoes. They encouraged emergency managers and spotters to be prepared for possible activation.

As the afternoon progressed, it became more obvious something major was looming. A special weather balloon launch showed winds were increasing in speed with height. The data from the launch also provided a profile for strong tornado development. At 3:49 p.m., the Storm Prediction Center upgraded from a moderate to a high risk. The signs were now evident, a major severe weather incident was about to happen.

At 4:15 p.m. the Norman Forecast Office issued a severe thunderstorm warning for Comanche County. This would be the first of many warnings that day. Less than 30 minutes later, the Storm Prediction Center issued a tornado watch for western and central Oklahoma. Explosive thunderstorms were developing. Things were about to get very bad.

Only moments after the tornado watch came out, the Norman Forecast Office issued a tornado warning for Comanche, Grady, and Caddo counties. The first tornado of the day was spotted near Medicine Park, Oklahoma in Comanche County. Within an hour, residents in the Oklahoma City metro area were advised that storms with a history of tornadoes were approaching.

As evening drew near, numerous tornadic thunderstorms were now occurring in not only Oklahoma, but also southern Kansas. One particular storm was heading directly for Oklahoma City. Television and radio stations were now broadcasting severe weather information exclusively. Broadcasters told area residents they should be in their tornado shelters and taking all precautions to protect themselves.

At 6:57 p.m., the Norman Forecast Office issued the first ever ìTornado Emergencyî. This warned that a large and damaging tornado would be entering Moore and south Oklahoma City within the next 15 minutes. The Storm Prediction Center followed by issuing a new tornado watch. This stated a particularly dangerous situation with destructive tornadoes was possible.

Around this time, the Norman Forecast Office even considered going into back-up mode. David Andra explains.

ANDRA:The forecast office did consider backup mode operation that evening, because there was a likelihood we felt that at some point the storm could turn a little bit and move more towards Norman. That's often what happens with classic supercell thunderstorms. That turn never occurred, but we prepared for that. We talked to our sister office, our backup office in Tulsa, and stayed in touch with them in the event that something changed. That it moved and turned to the right and affected Norman or some of our critical infrastructure in the way of telephone communications, electricity, and things like that were affected.

By the end of the day, more than 70 tornadoes had occurred in Oklahoma and southern Kansas. One long-track, violent tornado traveled from near Chickasha, Oklahoma to just east of Oklahoma City. The tornado was rated as an F5, the most destructive on the Fujita damage scale. In Oklahoma and Cleveland counties alone, nearly 10,000 structures were either damaged or destroyed. There were 46 fatalities and more than 800 injuries from the event.

Gayland Kitch, Director of Emergency Management and Communications for the City of Moore, recalls his communityís response to this tragic situation.

KITCH: Our public did very well. There are just hundreds of stories about people that came out of wherever they took shelter and brushed themselves off and then went looking for neighbors and assisted their neighbors and getting them out of where they had been.

Although many people died, hundreds if not thousands more were saved because they were aware of the situation.

KITCH: The warning on May 3rd was very good. There was a study run by the Health Department that interviewed victims and they found that ninety five percent of the people that were victims knew the tornado was coming. Television was the primary means of warning that day. The tornado came right at the news time and in a very, very active news weather time of the day where people were watching. There was a lot of warning that was passed word of mouth, someone saying it on television, calling their daughters or mothers and making sure they were aware or calling their neighbors. So, the warning on my third was outstanding.

On May 3rd, the Norman Forecast Office averaged a 32 minute lead time on the tornado warnings. This allowed people plenty of time to seek shelter. Forecasters, broadcast media, emergency managers, and volunteer storm spotters had worked together to inform the public.

So, what have we learned from this and what would be different today?

David Andra explains what the Norman Forecast Office has learned in the past ten years.

ANDRA: Some of the biggest improvements in the past ten years I think have to do with the way we disseminate our information. The explosion of the Internet, web pages and wireless technologies is really opening new doors for us to reach more people with graphical information, more specific information and do it more quickly.

And from a public viewpoint, Gayland Kitch has a positive outlook on how a community can persevere.

KITCH: It's amazing to me, and even ten years later it just amazes me, that within just a span of a couple of months we cleaned up the damage from eight hundred to a thousand homes that had been destroyed and damaged, had the area looking clean, and already had people rebuilding homes. Within a year or year and a half, almost everybody had rebuilt and today we've had another tornado through the same area, cleaned it up and put it back and unless you know where the area is at, you can drive up and down the highway right now or drive through our streets and not ever know that there was an event at all. Probably the main lesson I learned from the event was that you can have what you would normally classified as a worst case event and survive. 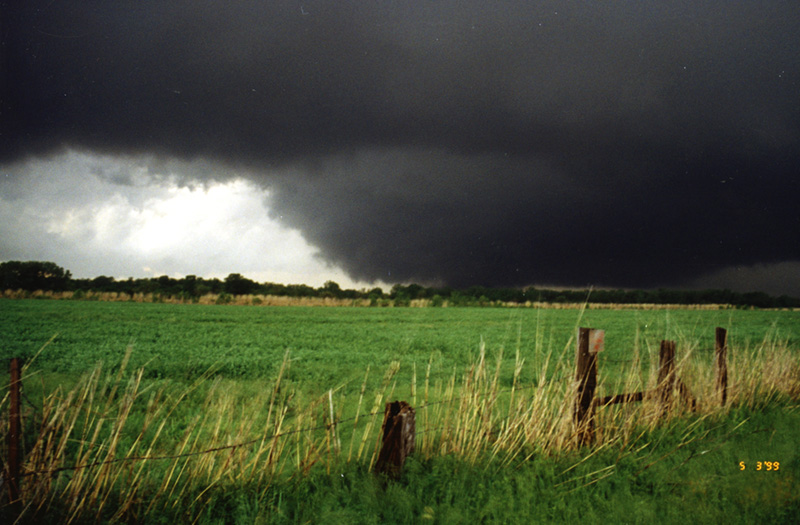 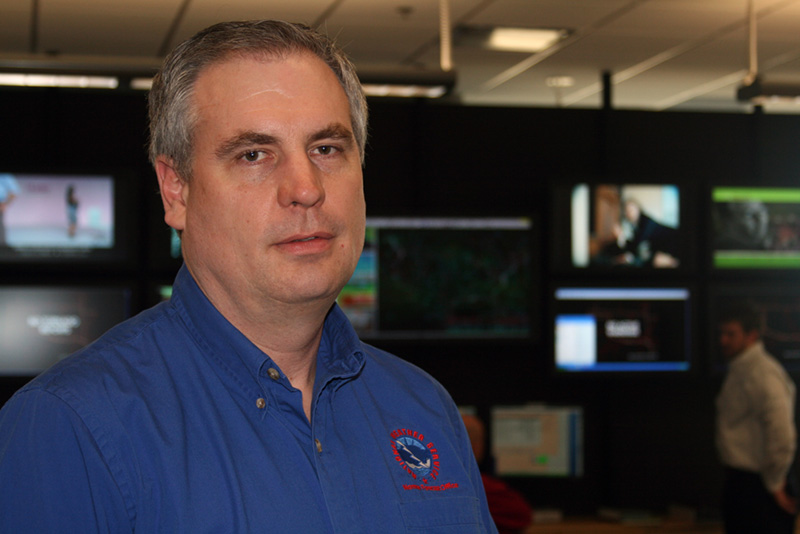 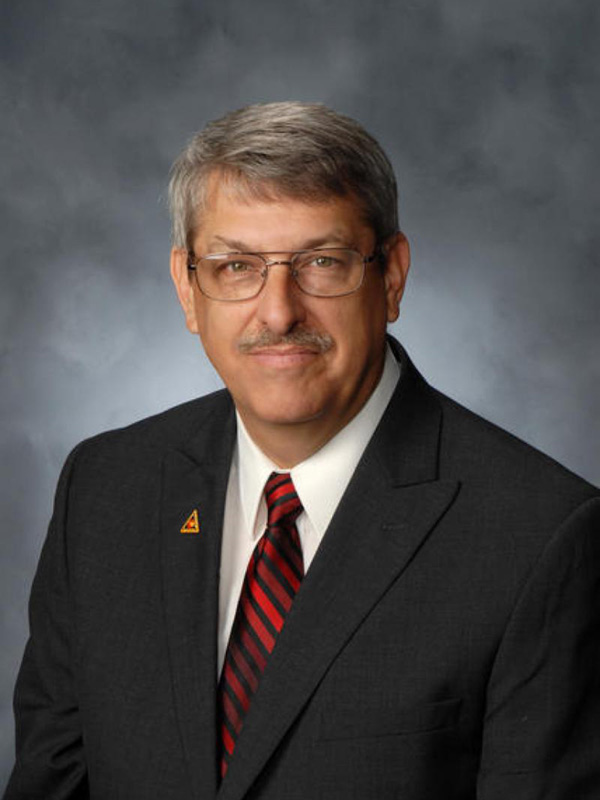 Gayland Kitch, Director of Emergency Management and Communications for the city of Moore, Oklahoma. [+] 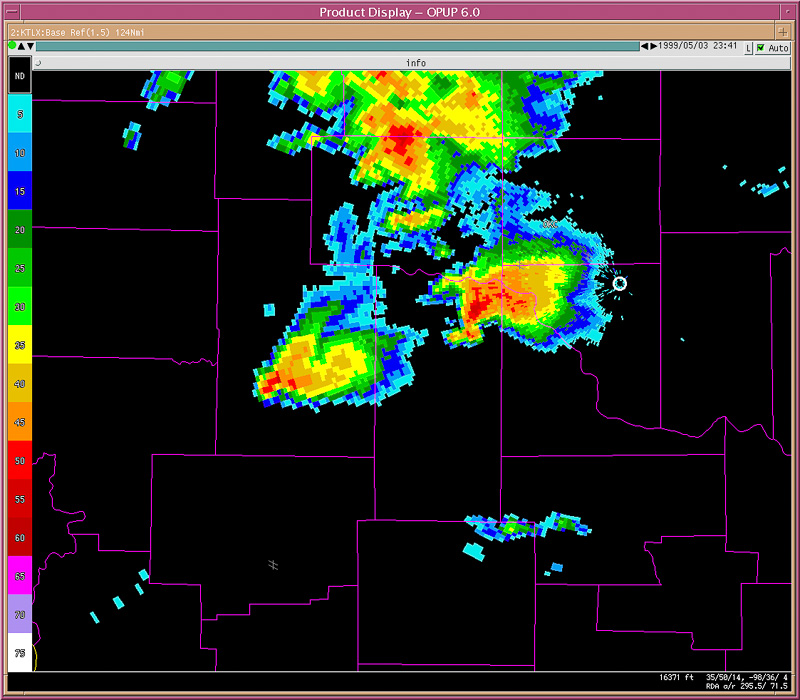 Map showing the paths of tornadoes in the May3–4 tornado outbreak. [+] 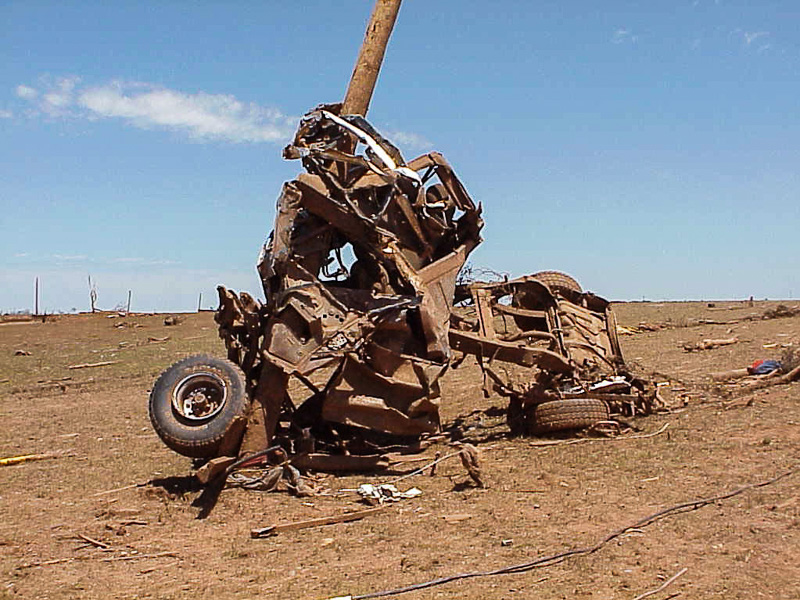 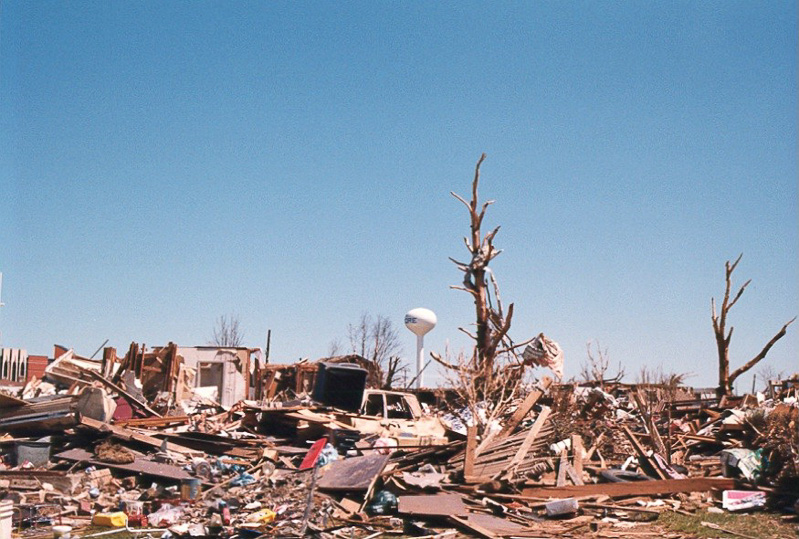 Moore, Oklahoma after the devastating May 3 tornado. [+]