PEYTON: Hey, everybody! Welcome to Pod-Sized Science. I’m Peyton Galyean. In this episode, we’ll hear from National Severe Storms Lab research scientists working in the NOAA Hazardous Weather Testbed. They discuss how their teams adapted to a virtual environment, what new tools are being tested, and what future collaborations may look like.

If you haven’t seen the Bite-Sized Science video yet, pause this and check that out first. All right, let’s jump into this episode.

Since the National Weather Center opened in 2006, the NOAA Hazardous Weather Testbed has been the place for collaboration. In 2020, COVID closed the door to in-person meetings. Also gone was direct access to the powerful workstations running AWIPS. In case you’re wondering, AWIPS stands for Advanced Weather Interactive Processing Systems, and are similar to those used by NOAA National Weather Service forecasters to analyze weather and create products like warnings.

Kristin Calhoun, a research scientist at NSSL, has been involved in the Hazardous Weather Testbed for over a decade. She works closely with the technical team who handles all the ins and outs of making the operational software work. The team knew it would be a huge transition to move the AWIPS system into a virtual environment.

KRISTIN: AWIPS in the cloud was a totally new feature for us. Some initial testing was being done probably right at the first half of 2020, but it was accelerated greatly because we knew that was our best option. So we had a team of a few people collaborating with other people in the National Weather Service who had been developing this with the idea of focused IDSS. So that means impact decision support services. Forecasters would occasionally go out to a field office or to an emergency management office and want something like AWIPS on the go. And so cloud computing was just being kind of investigated in this early time period of the virtual work-from-home environment, and we knew it was something we could leverage.

PEYTON: Kristin’s experiment had forecasters working real-time weather events. But with participants in different time zones, the logistics were tricky.

KRISTIN: Forecasters are anywhere from Maine to Guam. So we're also trying to figure out time of day when we operate relative to expected severe weather and then bringing in a forecaster in Maine and Guam at the same time, somebody is losing sleep at their home place.

PEYTON: Another challenge for the team was keeping the experiment running smoothly when technical issues popped up.

KRISTIN: We're also dependent on home software systems and home hardware, home Wi-Fi connections. So if somebody at their home office has Wi-Fi that's intermittent, if everybody's watching Disney Plus in the background, it can slow down our connection, and we might have some staggered frustration in that regard. When we have to troubleshoot here locally in the testbed usually we can still continue on conversations while somebody gets in there and makes adjustments on a local system. But when we have to troubleshoot with somebody at home, the forecaster becomes part of the IT process. So, somebody is telling them what buttons to push, what graphs to pull up. If we're seeing kind of where the load is bad, we can work with them, but they become an integral part of that IT process.

PEYTON: There were also upsides to going virtual. Without physical space restrictions, more people could participate. And being virtual allowed for multiple ways to communicate with one another.

KRISTIN: We have different channels to do chat, as well as channels of people talking through a kind of Google Meet virtual sense of face-to-face. And a lot of people actually like the writing more than the talking through things. So for more introverted types that like to do chat, that ability to communicate still was there, but we still had the face to face kind of communication for the more extroverted people who like to talk through the whole process.

It's becoming very clear that there's a lot of potential for artificial intelligence and machine learning to really improve severe weather forecasts quite a bit when used in the right way. So that's an area that we've really focused on in the HWT…

PEYTON: Since spring 2020, new technology has been implemented and the scientists are excited about the successful steps they’ve taken with their research. Here’s Adam Clark, NSSL’s lead coordinator for the NOAA Hazardous Weather Testbed Spring Forecasting Experiment.

ADAM: One area of progress that we've made in the spring forecasting experiments is building in more controlled experiments for our forecasting activities. And so one example is that last year we did these Day Two severe weather forecasts. We had one group that used convection-allowing models and then the other group didn't, so that we could try to gauge what the value of that guidance was at the Day Two forecasting lead time, which is something that we hadn't done in the past. We did the same thing when we used a tool called Warn On Forecast. We had one group of people that used Warn on Forecast to issue outlooks, and then the other didn't use it, to gauge what the value was. So this is something that I think was really helpful, and we learned a lot from doing it, and the forecasters liked doing it.

Another area of progress that we've made is in the use of artificial intelligence for enhancing our severe weather forecasting products. And so this is something that has become—I guess you could say—really popular in the last few years, but it's becoming very clear that there's a lot of potential for artificial intelligence and machine learning to really improve severe weather forecasts quite a bit when used in the right way. So that's an area that we've really focused on in the HWT is how can forecasters use this information? And so it's become kind of an iterative process where, you know, we try things, we get feedback, we try it again, we get more feedback, and then we kind of optimize the guidance that we've provided with these different methods that are based on artificial intelligence. So it's a growing area of research with a lot of potential, and we're going to keep looking at it in the HWT.

PEYTON: Kristin’s group is excited to begin testing a new feature that can help detect tornadoes.

KRISTIN: For probabilistic hazard information, we have a new tornado algorithm that gives the probabilities associated with a circulation that forecasters can use to create this probabilistic hazard information. So we'll be trying that. We're trying some new ways for quick updates. This goes into last year, we noticed it was taking forecasters about five to ten minutes to issue a product, and that's pretty long when we're talking about the life span of a tornado where minutes matter. So we're talking about different ways that we can test quick updates. So that'd take that down to like 30 seconds if they only need to change a storm motion by a little bit or update a direction it's moving. So we're excited to test that out and hope to see kind of positive feedback. But if not, we will redesign and find something that works.

I think in the end it's really going to benefit us and how we do research, it's going to make it more efficient. It's going to allow us to interact with a broader range of people.

PEYTON: Reflecting back on the disruption COVID caused in 2020—and how they adapted—both Adam and Kristin see the pay off for future experiments.

ADAM: You know, it forced us to make these really big changes in how we work and how we conduct research. And I think these were things that probably would have happened gradually over time if it wouldn't have been for COVID. But because of COVID, we were forced to do these things and to figure out how to work in this different workplace. So I think in that way, it's probably accelerated some change. And then when we get back to working in person, it's going to look a lot different and it's probably going to be better. So there'll be people that will work remotely part of their workweek that weren't doing that before. And so we're going to have to figure out how to conduct meetings in kind of this hybrid workplace. And I think we already have the tools to to do it because of our experience from the past two or three years. And so I think in the end it's really going to benefit us and how we do research, it's going to make it more efficient. It's going to allow us to interact with a broader range of people.

KRISTIN: So maybe early on, doing something virtual with something new that we're testing, and we just need somebody's opinion for a couple of days, that's a great route to do something virtually. Whereas if we do something bigger and in-person where we bring in all sorts of end users and have a conversation going back and forth across teams of people, that might be better to do in person. But I'm excited about the capabilities we have going forward now.

PEYTON: Thank you for tuning into Pod-Sized Science. We hope you enjoyed it. To learn more about NOAA NSSL and other research projects like this one, stop by nssl.noaa.gov and follow us on social media. 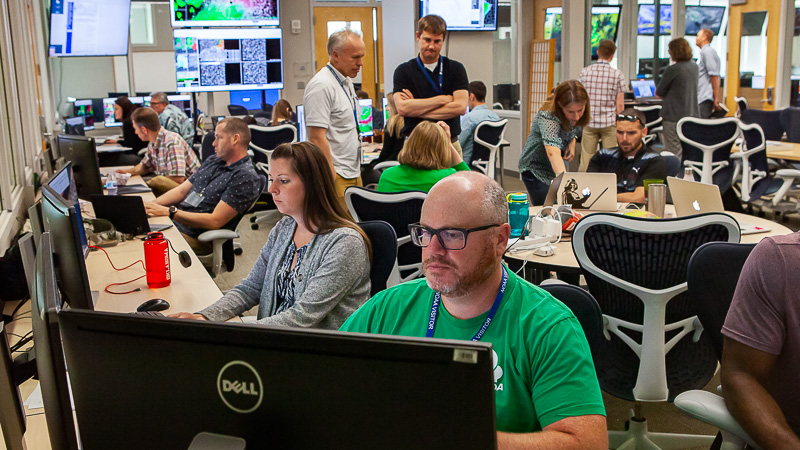 Since the National Weather Center opened in 2006, the NOAA Hazardous Weather Testbed has been the place for collaboration.  [+] 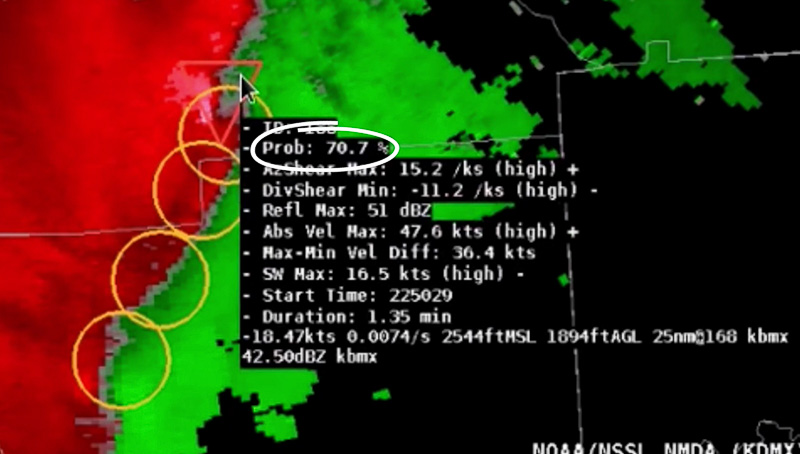