Dual-polarization (dual-pol) radar technology is truly a NOAA-wide accomplishment. The NOAA National Severe Storms Laboratory spent nearly 30 years researching and developing the technology. Dual-pol is the most significant enhancement ever made to the nation's radar network since Doppler radar was first installed in the early 1990s.The NOAA National Weather Service (NWS) and NSSL developed the specifications for modifications to the single-polarization WSR-88D radars. The upgrade was tested by engineers at the NWS Radar Operations Center and such tests decided the practicality of upgrading the nationwide network of Doppler radars.

A quick glance at the new dual polarization technology added to the national weather radar network. Watch on YouTube

In 2002-2003, NSSL conducted the Joint Polarization Experiment (JPOLE) to demonstrate the operational capabilities of the prototype dual-pol WSR-88D radar. During JPOLE, NSSL scientists aided in data interpretation as it was delivered in “real-time” to NWS forecasters and other users. JPOLE proved that significant improvements in rainfall estimation, precipitation classification, data quality and weather hazard detection were possible using polarimetric radar and provided supporting evidence for upgrading the entire NEXRAD fleet to dual-pol capabilities. Since the completion of the upgrade to dual-pol, the NOAA NWS Warning Decision Training Division has provided timely and relevant training to all NWS forecasters who use the technology.

Radars send out short pulses, also known as bursts, of electromagnetic energy. Some of this energy is scattered by particles or objects in the atmosphere and returns back to the radar antenna. A computer processes the returned signals and, through algorithms, can identify kinds of particles the radar “saw,” including how quickly the particles are moving toward or away from the radar (i.e., the Doppler effect).

Single-polarization Doppler radars, including the NOAA radars before the dual-polarization upgrade, typically transmit horizontally polarized electromagnetic waves, which only give a measure of the horizontal dimension of precipitation particles, like snow, ice pellets, hail and rain. This one-dimensional picture makes it difficult to tell the difference between precipitation types.

With dual-pol technology, the picture becomes two-dimensional because the radar sends both horizontally and vertically polarized electromagnetic waves. As these perpendicular fields scatter, or “bounce,” off of an object and are received back at the radar, a computer program processes information about the horizontal and vertical properties of the particles. For example, the corresponding cross-sections give forecasters a measure of the size and shape of the object, which can be used to infer more information about the types of objects that scattered the waves, like whether the radar is observing rain or snow, or big raindrops versus small raindrops. Moreover, the correlation between the two returns is very different in cases of precipitation compared to non-precipitation returns.

Dual-pol researchers at NSSL are endeavoring to:

The Benefits of dual-polarization radar

Dual-pol radar provides measurable benefits to a variety of users: 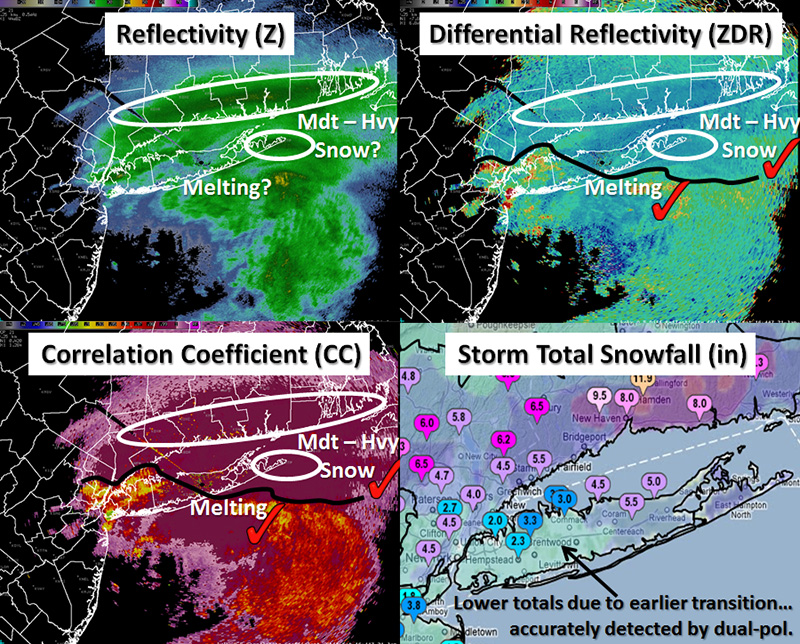 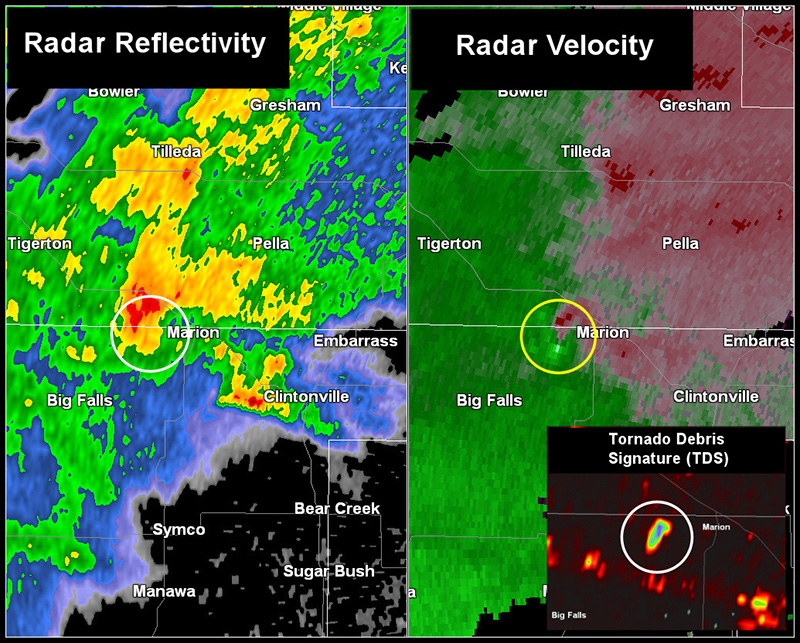 Radar reflectivity (left) and radar velocity (right) around time of an EF1 tornado west of Marion, Wisconsin. The insert in the images shows the dual polarization correlation coefficient (CC) product denoting the location of debris produced by the tornado. [+]

What is dual polarization technology? Why should you care? On this episode of That Weather Show, we answer those questions by using parodies of our favorite commercials. Watch on YouTube